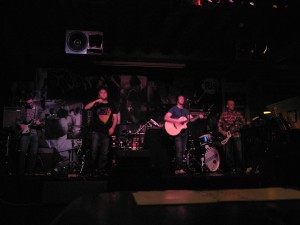 Wolfmonkey were the opening act at a somewhat deserted PJ Molloys on the Sunday night I went to see them for the first time as a whole band. Having seen Wolf performing solo previously at an acoustic launch gig for D Rocks for Oxjam in october, I was left intrigued, as before he delivered an outstanding solo performance, Wolf told us Monkey was their vocalist!

Wolfmonkey a five piece outfit, clearly bemused by the empty dunfermline venue, carried on regardless starting with a catchy wee number entitled Shine The Light  which was a good start, certainly worthy of a later time slot than was given. The Cowdenbeath bands’ next offering, Trying To Find My Way, upped the standard musically and demonstrated an ability to vary their vocal making their sound unique and interesting to the listener. 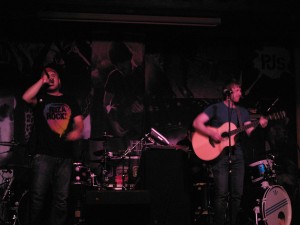 As Wolfmonkey continued through their well rehearsed set, showcasing one great self written song after another, I felt each song was progressively better than its predecessor which can only be good because as I said Shine the light was a good start! They further demonstrated their talent by treating us to their “Redneck Song”, as well as a rendition of a song they had written four days ago and only rehearsed once called Junkie, which I loved and a superb rock style rap which shows a lot of influences from many genres. Although in a rather good video on youtube, entitled “Wolfmonkey BBC Interview” Wolf confesses his main influence is Simba from the Lion King and Monkey says his biggest influence is claude Greengrass from TV series Heartbeat.

Wolfmonkey played a great set in my opinion and showed they are more than just promising musicians with some good comedy thrown in too, some of their youtube uploads certainly favour comedy over music but their fantastic acoustic stuff, alongside the comedy and some pretty good videos of the whole band available to see on youtube only demonstrate further the unique talent that is Wolfmonkey, A unique band that are well worth the ticket price.

Wolfmonkey are well worth the ticket price

I like Wolfmonkey, I like their raw talent and willingness to showcase that raw side alongside well tuned performances such as the one I saw at PJ Molloys that night, I like their varied style and the local roots to some of their songs  I like their confidence in themselves which comes through in their music and their song writing. I like the comedy too. Maybe you should do a couple of comedy songs lads, like the Australians Kevin Bloody Wilson or Axis Of Awesome, that would be fun. But don’t stop the serious stuff because that stuff needs to be heard.

I for one will be going to see Wolfmonkey again soon. Maybe we can catch the guys and find out if Simba and Greengrass are for real and get the gossip on their plans for the future. In the meantime get along and see them if you can. Or check them out on youtube. 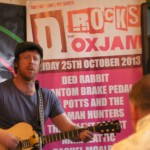 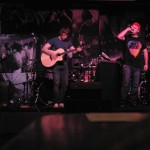 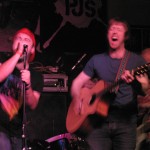 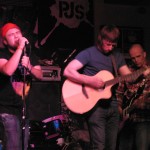 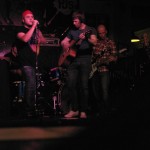 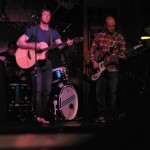 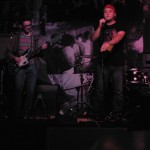 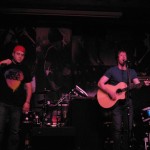 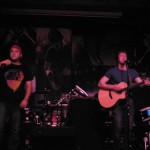 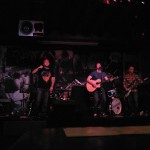 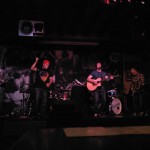 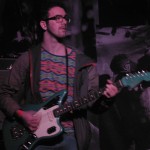 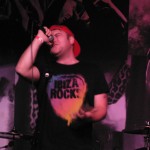 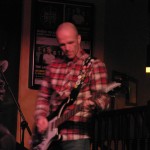 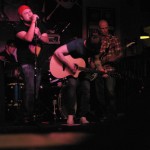 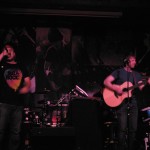 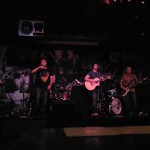