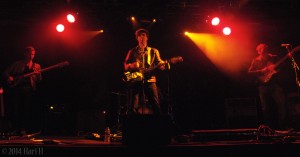 Stolen Sound dropped a bomb when they performed for ‘Up The Junction’ at Liquid Room, Edinburgh this year. The debut festival run by Hazel Miller for Mileout Events and Promotions, included Shaun Gilroy, The Delaplains, Last Minute Glory, Danny Mahon, The Rah’s, The Begbies, Modern Faces and Twisted Wheel.

Attracting a friendly bunch of music lovers the party started as Stolen Sound cranked up the volume and rocked the crowd from one shockingly brilliant song to the next. Starting their seven track performance with Pretend and ending on Over and Over, It was an electrifying set and a revelation to many, the question on everyone’s lips was, if the first band are this good, then what can we expect from the rest of the day? It was a combination of catchy guitar riffs, thick bass, interspersed with solid drums and consistent fierce vocals, that gripped us all, Every change, each new hook in style and vocal range slammed our ears, what a discovery. 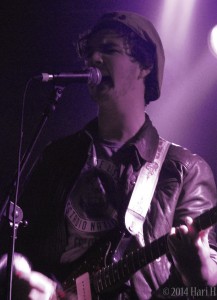 Coming from Glasgow, members,  Andy Fyfe (Lead Guitar), Bradley Revel ‘Pockets’ (Bass) Connor McGlave (Lead Vocalist), Mike Biggert (Drummer) and Bradley Revel ‘Pockets’ (Bass), brought the heat, and set the bar high.   While they were playing I was able to learn more about lead vocalist Connor.  Prior to Stolen Sound, the singer was  a soloist for a number of years , he supported The View at the Glasgow Barrowlands in 2011, and even has a makeshift studio built into his house, it felt like we had unmasked a professional at his core.

The band also has a noticeable following, in fact, after their set, a spectator couldn’t stop raving to me about them, saying the band are “Sh*t Hot”, and I had to agree. They have the personality to match their Indie rock and roll image. Connor was the only singer I have ever encountered that gave me the finger (middle that is). I’m not sure if it was in jest for the camera or if I was in his face too much. Either way it was unexpected, and for some reason that photo came out a little blurry as well! 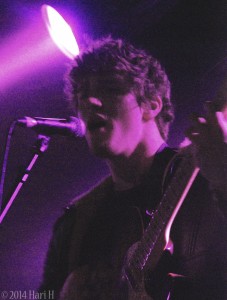 Image aside, I do believe there is more to this band than meets the eye, for now, I can definitely assert that Stolen Sound is an edgy rock and roll band, with seriously hot tunes that could melt your ice cream on the chilliest of days. The high quality of this band’s performance was something else for 2.30pm on a rainy Saturday afternoon. Thankfully some of us made the start of the gig in time to see them perform.  Hazel Miller has even asked Stolen Sound back for her second event, to be held on 10th May in Glasgow. The band will support The Begbies, along with The Delaplains, and Blossoms.

As we await their official Facebook page, you can check out a sample of Stolen Sound’s songs on Sound Cloud and see them at their next gig.  I have no doubt; they will be bringing the heat, all over again! 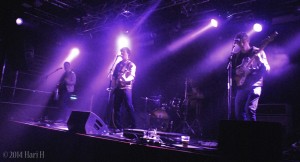 Stolen Sound next perform at:

Mileout Events and Promotions Presents:The Begbies, The Classic Grand, 10th May, from 6.30pm