The old Hairdressers is an odd venue. You travel up some vertigo inducing stairs from a lounge bar that plays soul music and 60’s garage and past the strangest gents toilet in Glasgow (really). And then you get to the top and into the music room your trip is rewarded by some great live music. I’ve only been here twice before to see bands and it is an intimate venue where the band and the audience are in the same space. It’s a bit like going round to a mate’s house to listen to records. Speaking of which, thanks to Simon, Natalie, Mark, Jim and Keith who all met me before the gig and kept me company. 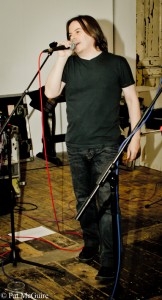 Daniel Wylie will be known to many as the founder member of The Cosmic Rough Riders. A band that managed two top forty hits and supported U2 during their career. Nowadays he is a solo act and, albeit joined by various musicians live and on record. Tonight he is Joined by Neil Sturgeon and Dave Andrews (From The Golden Hour). Daniel’s son Joshua also plays too which adds a nice touch to the gig. (Making Daniel the “third best guitar player” in his family.)

Having a such a great back catalogue of music to pick from must be a challenge. The set includes many tracks from over the years and some from his last LP “Fake your own death”. Daniel’s songs are tinged with nostalgia and sadness, but live they still are uplifting and full of melodic hooks and chord changes that send a tingle up your spine. It’s not about sadness, more a reflective set with some great songs that have been written with an obvious sincerity that infects his songs. 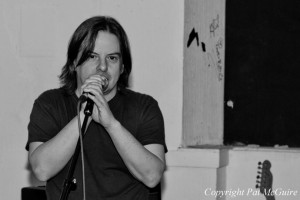 The gig is interspersed with some banter to and from the crowd. Old friends from his schooldays are here tonight along with fans of his career who have seen him play many times before. To my eternal regret this is the first time I’ve seen him live, but I wasn’t disappointed, instead I felt drawn into the communal experience that you only get at gigs like this. Eye to eye contact between the artist and the crowd is what makes a good gig brilliant. Especially when it’s done for real. Playing great songs with great people only adds to that. Having a receptive and involved audience amplifies it more. All the ingredients that send people home feeling great and liberated, and possibly even changed.

During the gig Daniel talks about people that inspired him. Elvis Costello and R.E.M. for instance (and he does a brilliant cover of R.E.M.’s “The one I love”) and you get the feeling that while he is a songwriter and producer, he is mainly a music fan who makes great music and would play in a basement to ten people just for the joy of doing it. Before and after the gig he spends time talking to people and signing CDs. Not like some big star who has been on the telly and toured the world, just as a guy from Castlemilk who got to follow one of his dreams (he didn’t get to play for Celtic though. But how many footballers get to play great music and record great tunes?) An impromptu and concise cover of Lou Reed’s “Metal Machine Music” which involves Daniel making hissing noises into his mic gets nods from the crowd. They know their stuff…

Of course “Revolution in the Summertime” gets played. It wouldn’t be a Daniel Wylie gig without it. Also he dedicates “Everything I Give You” to Mark and Elaine which is another nice touch as he gave them the song for their wedding. This connection with fans is something that separates bands you go to see, and bands you end up following. I don’t know when Daniel Wylie will be playing again or where for that matter. I do know that I will be there though, and I hope that you will be too.