Work today was rubbish. I sat at my desk and talked to morons on the phone as usual. I annoyed my workmates by drumming on my desk and doing double bass drum flams with my feet and triplets with my fingers. Being middle aged, my belly worked as a floor tom for added drummage. The most exciting part of that shift, was when someone called the support line and just screamed expletives for almost 2 minutes then hung up. I love that random stuff when it happens. I hope that crazy caller gets some therapy soon and no one dies.

But even though I had to endure a shift on a Saturday afternoon, when I could have been playing poker or even buying books from the pound shop, I knew I had something cool to do that night. It sustained me through the day of BS and idiocracy. I was going to be taking pictures of some metal bands!

What I know about “Metal” you could probably write on the edge of a postage stamp if you used a huge magic marker. I don’t claim to be an expert, so if I make a faux pas ( that’s a mistake or “false step”, for anyone who is too stupid to Google “faux pas” ) in this review, please accept my apologies beforehand.
Also I would like give special thanks to Gerry Corr and STG promotions for the media pass. And the venue itself : River (which used to be Barfly) for selling pints at three quid (yes only three quid for a pint, I almost fainted!) and putting on some great gigs in a good venue.

So, to the gig. As I said earlier, I’m not a Metal expert. But there are as many sub genres of Metal now as there are wrinkles on Iggy Pop’s testicles. I’ve heard some groove Metal, dark Metal, death Metal, thrash Metal, very Metal, mental Metal and of course sheet Metal..okay that last one I made up, fabricated even (a wee joke there). My point is there are loads of types to this general type of music. Tonight the three bands are all different from each other but are still METAL. 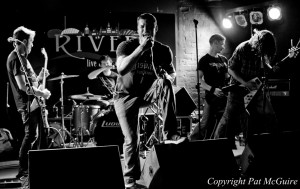 Out front the sound is good as AMOK take to the stage. Speeding into their stuff and despite the place not being as full as it should be, they get tore into their own brand of METAL. Lots of riffage and tempo changes and with a bassist who looks like a cross between Billy Bragg and Prince Harry. AMOK run amok. This is what I remember classic metal being like. Their singer has a vocal range that reminds me of Bruce Dickinson (Iron Maiden) when he had all his own hair and didn’t buy it from Ebay. (Don’t quote me on that, but he did…nah he didnae.) Great band, loved their set. Their drummer is a “Banger” too. Broke the kit a few times (well he knocked the first tom off it’s mount.) And any decent drummer is always a “Banger” so no harm done there. AMOK are Loud and proficient and Metal as feck. Go and see them live or buy their music if you like loud rock played by dudes who are into it. 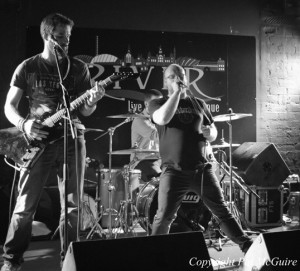 Next on stage we have 28 mph. Who to my ears are a bit more punk/metalish. A good band, and not knocking them at all, but not as tight as they could be. Still they do their set with aplomb, despite the request for “James Blunt” covers from a member of the audience. (I’m sure this was an in joke and not an actual request.) They deliver some more vibey METAL than the usual. Some drones and Eastern influenced Rock too. Maybe their set wasn’t as tight as usual, I dunno as this is the first time I’ve seen them. Not a bad performance, I just think they can be better. And please don’t think I’m trying to be superior or that I assume I know anything about this genre. I’m just speaking as a guy who loves live music. I will go and see this band again because they do have some good stuff going on, perhaps tonight wasn’t a good gig for them? 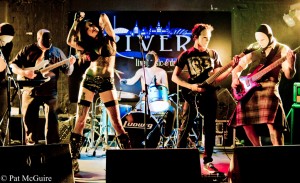 Right, now. Splintered Halo, what can we say about a band that has only one “named” member – Evelyn? While the rest of the band wear white / black masks thus making them anonymous. Well apart from the obvious, they are an excellent band. By that I mean their version of METAL is loud, full of musicality and they know how to do a show. Before the gig and whilst having a smoke outside the venue I met and had a chat with some of them sans stage gear. Under the official secrets act I can’t reveal who they were, but can say they were nice blokes and have a pedigree in music that wouldn’t surprise you. One thing about METAL in general, regardless of what sub genre, is that you need to be able to play your instruments really well. It’s one of the genres that won’t allow you to fluff notes or drop beats. You can’t cover up mistakes and call it Punk or Indie. 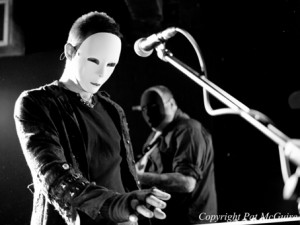 Splintered Halo have the riffs and the arrangements down to a T. Also visually they are astounding. The masks the the band members wear adds an eeriness to their stage persona. And Evelyn layers that with a sexuality and presence as well as fantastic stagecraft that makes seeing this band a total event. From the get go you feel you are going to be entertained whether you want to or not. 6 string bass, technical drums, ethereal keyboards and guitars that work together in an almost orchestral way. And over that you have a front person that puts her soul into the gig. The stage is warm the crowd are too. Songs rip and weave in a torrential crescendo from the P.A. 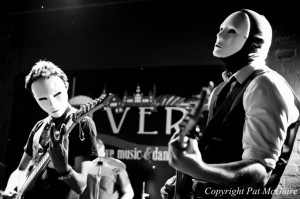 “Evelyn, you are so hot!” is the shout from the female voices in the crowd. I think the blokes are scared but appreciative. I don’t want to over focus on the fact that Splintered Halo has an attractive female front person, but they do. It is part of the band’s dynamic. She almost evokes both Shirley Manson and Marilyn Manson as if both of them were morphed into one body. But at the same time her vocals are not just a pastiche of one or the other, they are just Evelyn’s. 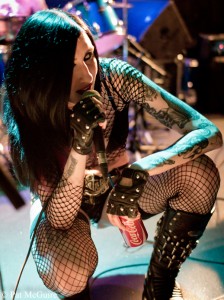 All in all it was a great gig, in a great venue. Kudos to all of the bands and the crowd and the venue staff who made my Saturday night a good yin. METAL is not my usual genre. But good music and live bands is what counts. People are playing live, people are putting on gigs. Venues are creating spaces for Joe Public to go and hear music. What I am saying is. Git yer bodies to gigs, embrace live music, take a risk. Support live bands and the venues and promoters that put shows on. Otherwise we will be stuck with crappy talent shows on the telly. And really have no excuse at all for it all being crap.