Back in March I saw Jamie Coleman playing live at King Tuts. At that time I was covering John Lennon McCullagh so while I mentioned Jamie’s set and took a couple of pictures of him live, I didn’t feel qualified to write a review on him. Since then we got in touch via social media and he asked me to come along to the gig tonight at Pivo Pivo. I also got to meet him in person and do an interview where he speaks about his influences and upcoming gigs as well as what makes him tick. (See links at the bottom to listen in.) 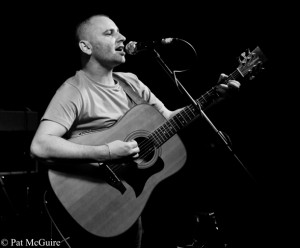 One of the reasons I wanted to cover Jamie Coleman live is that at the King Tuts gig his set was rousing and carried the crowd. I didn’t know his background or his song titles but detected something different and yet familiar there. Since then I have had the chance to listen to his stuff closely and my first impressions have proven to be correct. You know when you hear talented people. Their tunes/lyrics stick. You keep hearing part of the song or a part of a chorus and it won’t leave that record player in your head…

Jamie is first up in a mobbed Pivo Pivo. A small venue on Waterloo Street that seems to host a lot of great music. The gig itself has a lot more acts on the bill who I’d like to cover and maybe photograph soon.

I couldn’t stay to do pics or cover them though as I’m dead old and had an early shift the next day, however mucho kudos to Jay Hale (A Northern Contribution) who organised the gig. And the bands that turned up: who were – The Beat Movement, Joe Symes & The Loving Kind, The Jamie Reilly Band and Vida. I’d heard most of the sound checks and really wish I could have stayed for the whole gig. Although gig is not the right term for it, it was more like a review or a show where you’d expect John Mayall & the Bluesbreakers to appear. As if it was 1963 and in a basement in London instead of Glasgow. Back when Eric Clapton was learning his chops and clothes were that bit cooler. 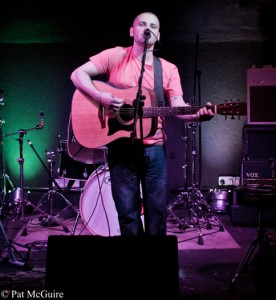 And not labouring the point or being too retro, but I almost wished I was back in my early teens and a wee Mod who would have loved the whole vibe of the gig, whilst also getting into the indie/rock/blues thing too. It wasn’t a flashback gig, but a modern take on a classic multi faceted genre that keeps on keeping on.

Jamie Coleman opens his set with “Morning after” one of his songs I alluded to earlier that just sticks in your head. A Jazzy/swingy blues number full of Maj 7th’s and vocals that seem to drawl at you only the way a son of Clydebank can. A few songs in “Wanna fade away” which is a dreamy, melancholic tune that could be the love child of Mazzy Star and Pink Floyd if they ever met one dark night. Glazed over with Jamie’s vocals “Take me away from this moment, I don’t wanna feel no pain. I just wanna feel free now, be myself again.” Really, re read that line. If you have never felt like that, you are not human.

What Jamie Coleman does live (and on his recordings) is capture feelings and emotions succinctly. It’s an art that can be learned, but only really works when it comes from the heart and soul. And while his onstage persona tonight might seem laid back, you know that the inspiration for them might not have been as casual. Jamie works at his songs and his performances. It’s not an act, it’s a distillation of experiences and observations wrapped up in a creativity borne from pain and joy and a lot of other emotions in between.

“Little Moody and Harry” is an inspirational song. Louder than most of his set, you can imagine this one with some drums and bass guitar kicking some ass. But even as an acoustic song it carries a lot of power. It almost reminds me of Mike Peters (The Alarm) back in the day (I mentioned that I’m old, back in the day means the 80’s and 90’s).

I’m not going to just do a song by song review though. Jamie did give me his set list for reference. That would be like me reading a dictionary aloud and beginning with Aardvark and ending with Zyxt (which is the last word in the Oxford English…) I’d rather focus on the feeling of the gig. And that is one of introspection, joy, and bloody good music! 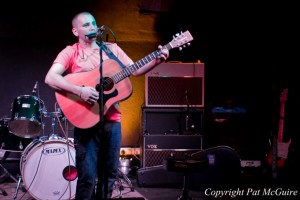 You have a guy on stage, not dressed up but not dressed down. Pouring his heart into the music. He doesn’t do banter or tell jokes or stories but does say hello to folk he knows. People are talking through the songs but he keeps on playing all the same. When Jamie Coleman puts on his guitar and starts playing, the room could be empty and it wouldn’t make a difference. He seems to get lost in the story of the song and it carries him away to a place that we are all invited to, but only if we chose to listen.

One song that he does tonight that I have been waiting for though is “The Fear”. As songs go this is the one that could define him in my eyes. It might sound at first as a reserved, yet jolly tune about drinking too much. But is it really? Maybe I’m reading my own issues into it but “Just gonna lie here, with the fear deep inside, and I don’t feel right” resonates with me on so many levels. Vocal delivery, lyrics and tune all just hit the spot. By accident or design it is just a great song from a great songwriter. I’m haunted by it. 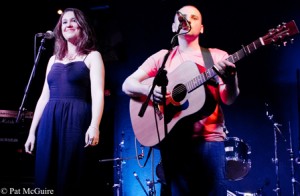 Jamie Coleman and Lynette from The Claurettes

And at the end of his set he is joined by Lynette from The Claurettes with “Hey Soul Sista” It’s a fantastic way to round off a brilliant set. (See the video from John McKinlay in the links below)

Jamie Coleman’s songs also have that essence of hope in them. Real hope that can only be defined from having been through it and then come out the other end stronger, that is what defines us essentially in life. We are the sum of what happens to us and around us. And how we in turn take that and move on to our next stage in life. Tonight I moved to a place where six strings, a voice, some harmonica and some great people made me feel alive and vibrant and not quite as old as when I walked in.

Jamie Coleman has some gigs coming up soon :

1st of May @ Beresford lounge for Session on a Rug
2nd may @ The Duchess of Kirkcaldy supporting John Power of Cast and The La’s
9th may @ Brixton Jamm London supporting MOL ( Mountains of Love : a new band featuring members of Alabama 3)
13th @ Roxy Glasgow

And some surprise shows in July ( which we can’t reveal right now, but they promise to be pretty amazing.)

My interview with Jamie Coleman on Mixcloud ( errors are mine and special guests are a guy asking for money, and a woman putting her drink on the table)

Also thanks to John McKinlay for his kind permission to link these live videos from the gig :

Morning After (Video by John Mckinlay)