One of the most enthusiastic bands to have played for us at the Voice of Scotland Showcase Weekend in PJ Molloys, is Common Ground. They organised a full bus and travelled all the way from their hometown of Kilwinning Ayrshire. This is the third showcase gig Voice of Scotland has put on and the second time the band has agreed to perform a live set for us. 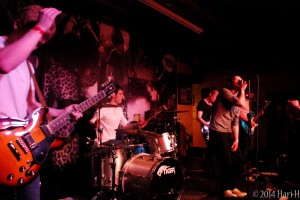 For anyone who doesn’t know the band, what’s your background?

Wullie and Craig: We got together in August last year.

Wullie: What happened was Craig, Sean and Lee always jammed together, Sean heard about me through music circles and that’s how I heard about him.  A spied him in the boozer tapped his shoulder, asked if he wanted to start a band, he said aye and that was it.

Excellent and the band are described as: ‘The great new hope of the British music scene’? 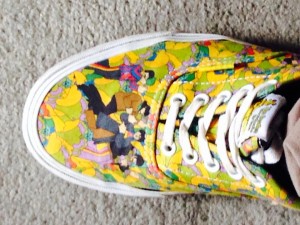 Wullie: Well that’s the rumour, we’re gonna take over the world man, especially with these shoes on!

Looking at his Yellow Submarine shoes, all the boys burst out laughing.

I want some for myself!

Who are all your influences then?

Wullie: John Lennon in The Beatles for me

The Beatles record Revolver, I listen to it all the time.

Wullie: John Lennon, just the way that guy was man, just everything about him

Lee: Aye we all have different influences

Everyone: Rolling Stones, The Libertines, all the same sort of raw guitar stuff, in your face

What is your sound?

Wullie: Oh we’re no like indie bands or anything like that. We’ve got our own sound.  It’s punky, raw, it’s not got a specific genre, but, it’s in your face, we’ve got a softer side too but…

You’re not big on showing it off? 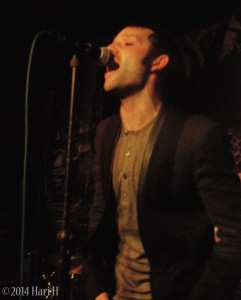 Okay…so who writes the songs?

Wullie: Sean and I get together and Sean is a bit of genius at writing them.

Do you spend a lot of time writing them?

Sean: Every day in the Garage

Lee: He came in one day with a new track and then the next day we were recording it.

Every time we try something new and see what it sounds like.

Then if it’s good we keep working on it. 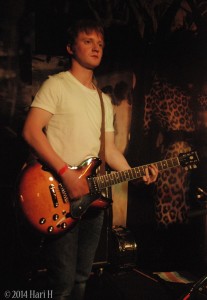 Do you have any repeat song requests?

Chris: Mr V.I.P. is quite popular.

Wullie: We just play a set through man, every song is different.

Lee: There are one or two songs we thought were good but we did nae think they were gonna be as good.

What songs are you particularly proud of?

Lee: I don’t think we would ever sing a song we were no proud of.

Wullie: I love them all man! I really love that song ‘That Thing Called Love’, it does something to me at the end. It’s got a big finish, it’s fast, it’s pacey – I like it and I like the beats in it. 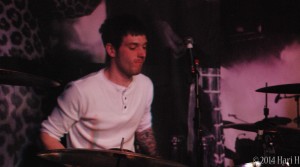 Do you perform any covers?

Wullie: Na, we just want to do our thing.

Don’t get me wrong; once you get to a certain level just flung out a cover out of respect but the now no just want to do one of our own.

Lee: If we put a song out as a cover and that becomes successful you think, it should have been one of our own songs that was successful.

Wullie: Gotta be careful with that. 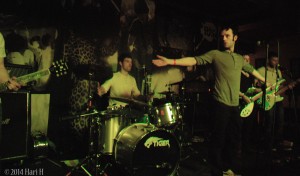 Chris: If you write songs that are good enough, it doesn’t matter; your own songs should blow people away just as much.

Lee: People who do too many covers are a bit desperate.

Wullie: They will be just known as a covers band and I’m no having that man.  Don’t get me wrong I like a good cover band if that’s who we’re there to see.

We’re just doing it and seeing what happens

If one person is no happy then we throw it in the bin, scrapped.

So…would you ever work with a pop band/ever consider it?

Best of luck to them and all that  *Laughing* 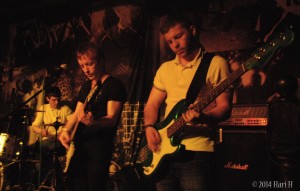 You’re trying to be yourselves…so who are you guys really??!

(I stepped right into that one!)

How do you prepare for a show then?

Craig: Just a practise once or twice through the week

Chris: We live about five minutes down the road from each other. It’s really handy especially good to get together and go to places like this. 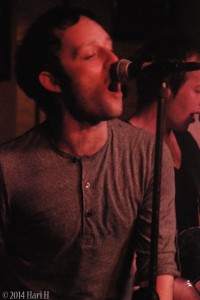 There are loads of other good bands on tonight, anyone in particular you’re looking forward to seeing?

Wullie:  Tijuana Bibles, I’ve heard about The Holy Ghosts but I’ve no seen them live.  Tijuana Bibles are more the sort of thing we’re into, they’re a different class.

What about other gigs, you played in King Tuts earlier this year, how was that?

Chris: It was dream come true!

We’ve been asked back to headline on June 14th.

Wullie: We asked The Mona Lisa’s to come and support us but they’re away that weekend

Wullie: They are in here tonight to see us as well, they’re no playing but they’re quite big fans of ours. They were on last night though.  We like what they do as well, we like their sound.

Buzzing for all that though 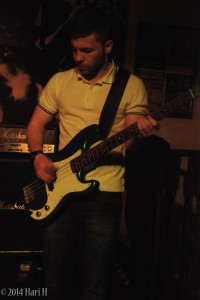 Where else are you planning to tour, all over Scotland?

Wullie: Aye if someone pays for it!

Lee: Think we’re just going to work with the gigs we’ve got just now and then be a bit more picky and choosey later!

Wullie: My First Music production are helping us, before we were just doing one gig after the other but now these guys are organising the gigs more.  It gives us time to work on material and that, so it’s good.

Aah good stuff, so how many tracks are you playing in total tonight?

Wullie:  Eight tracks.  We’re gonna drop two songs tonight that no one has ever heard of…

Ooh a Voice of Scotland exclusive, looking forward to it! 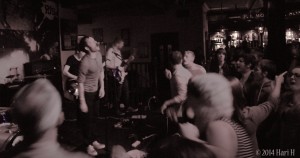 And how you all feeling for tonight then, hope you guys are not drunk!  What do you think of bands playing sets when they’ve had too much to drink?

Sean: You go in drunk, you’re ruining if for everybody else.  You think you’re amazing and you’re no, you’re sh*te

Lee: If someone records that, you’ll play it back, you’ll switch aff the first track, cos it’s embarrassing

Wullie: Couple of beers, if you cannae do it sober, there’s no point man!  But we don’t need anything we’re buzzing for this man!

Aww, happy to hear that, thank you very much for performing for us!

Wullie:  Live the dream – that it, that’s our motto!

Great, thanks lads can’t wait for your set tonight! 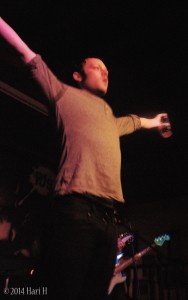 The lads performed a stage worthy show, the vocals were a rough smooth mix akin to an old Manchester band that defined a generation…  The guitars and drums were kicking out some sparky edgy riffs, and the electronics were shocking. Filling the dance floor were loads of people just going wild.  Drinks and shapes were being thrown; it felt like the crowd had Common Ground’s rhythm pulsing through their veins.  They have a raw, rough, fearless energy about them, PJ Molloys was all pumped up.  What a result!  Bands that create a vibe like that may just conquer the world. Their chat isn’t half bad either.

After our event, Common Ground went on to perform at The Classic Grand in Glasgow on April 24th, which was another smash hit.

Common Ground’s E.P.  can be streamed by following the link below.  Tracks include the superb: Snap On, Mr V.I.P.and That Thing Called Love.

We look forward to watching the lads’ progress, and would like to thank them once again for performing as part of the Voice of Scotland Showcase Weekend in PJ Molloys.

24th May –  Grand Hall for the Kilmarnock Dirty Weekender.