It feels odd writing about a singer who confesses that he “doesn’t like” his own songs. Preferring the works of other artists, you’ll find Dave McNeil, 23 from Fife happily belting out covers.  With his own songs, Dave is conscious of bands and even DJs playing up-tempo numbers at venues, feeling he produces and performs “quieter” songs.

On learning this information, I am writing to confirm, there is nothing “quiet” about this singer’s voice…

I caught up with Dave before his live performance for The Voice of Scotland Showcase Weekend.  We’ve been lucky enough to have Dave perform for us, three showcases in a row.

I just want to say thank you very much for performing at another showcase event for us Dave.

To start, please provide some background information for our readers: 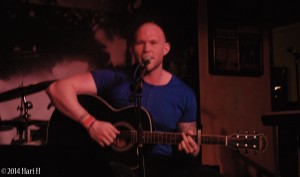 I’m a local lad and I’ve been playing the guitar since I was about 16. I started playing with a couple of lads in a pub called Torleys which is in Lochgelly and it’s where I’m from.

I started doing gigs when the Coaltown Daisies asked me to support them.  They used to come to the pub quite regularly.  That’s about it, they were my main source of gigs for about three years, I  gave up playing for a year, and a half and I’ve just started again.

I’ve been in touch with Neil (Voice of Scotland) for the past 9/10 months.   I actually started back at the Green Room with Donald (Donald Makin) for Oxjam.

I’m trying to get back into it and do as much gigging as possible, and as you know I’m playing tonight.

Of course, thanks again Dave!

Dave performs beautiful acoustic sets and is regularly played on Castle FM and Radio West Fife.  Heart wrenching originals from his EP made me want to interview the singer for myself, his delivery is something else.

Can you talk about Too Young for us, one of Voice Radio’s favourites?

That was a sad song; it was about two girls in my school that passed away.  A couple of months back in a car crash.  It’s not me knowing who they were, or having them as close friends, or missing them. It’s more that it was a big shock, they were young girls of 20-21 years of age. I used to walk past them every day in school. I remember serving them in the Glasshouse on a black Friday.

It was quite surreal, it was about that, I just put pen to paper.  The sad songs tend to be the only kind I can write!  *Laughs*

I don’t believe you

However, this song is performed with emotional sensitivity, obviously quite meaningful as well.  Can you describe then, what it’s like to write a song, and do you have a specific process?

No, not really, I tend to do it while I’m sitting at work actually, I probably shouldn’t say that! I base a song around a few key words. 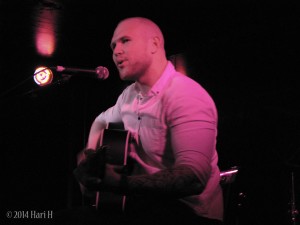 For example, with too young, somebody put up a comment on one of the girls Facebook pages:

“There’s now a brighter star in the sky”

I took that line and I thought, that’s really good, and I wrote the whole song around that one line.  I build line on line after that. Look to the stars feels quite linked to that as well. I wrote that when I was 16/17, hence all the stars on my arm!

I do remember taking (fuzzy) pictures of it at the Voice of Scotland Electric Circus gig!

I got them all up my back as well.  That song was about the first ever real love that I had.  It was puppy love, and it was a girl that I fancied at school.  It was her last day she was leaving to go to University, and I still had a couple of years to go.  We were in the school play, Fame together, and it was her birthday, so I wrote Look to the stars as a surprise.

I played it to her, and we saw each other for six months. And at the drop of a hat she was away.  So I was gutted! I was an angry 16-year old, I didn’t know what to do with myself, but that was the first song I wrote.

Did you not fancy pursuing a career in the performing arts then?  How were you rated in your school’s production of Fame? What was your role? 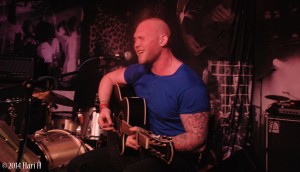 I was the lead in the production of Fame; my girlfriend at the time was a dancer in it. My Dad was the deputy head of the school, so nobody really got rated.  We all did really well, so we got a: “Well done” and that was that.

I couldn’t and still can’t read music even though I studied Higher Music at school and got an A for it.  To be in Theatre you need to be able to read music, I prefer what I’m doing now.   I was in the Choir as well and I played the Violin for six years.

Would you consider learning to read music now??

Got a long fine without it

What if you were offered a lump sum to play in one country abroad, for 30 nights?

I couldn’t risk it but obviously it’s depends on what’s involved, the place and amount!

Was it/has it ever been a creative outlet, and have your views towards making music changed? 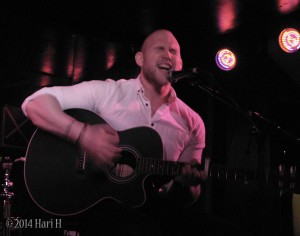 I don’t sit down and try and write music, I go driving around whilst humming a wee tune in my head.  If I quite fancy an idea, I’ll stop and write it down or put it in my phone.  I’ll sing four lines and go back and try and build a song around it.  But if I sit down and try to write a song, I Cannae do it!  It’s just if something catches my eye, spurs on a memory, or a feeling if you like

So that tends to be how I write songs. It’s not just a creative outlet because I prefer to sit and play covers.   Because, I know how the songs originally sound, and I can change them and make them my own   When I sing, and write my own songs, I tend not to like them!

Why is that, is that because you feel you need to perform your songs a certain way?

I really don’t know, for instance you’ve got guys like Paolo Nutini who’s got a certain style, some people like that, some people don’t.

What about when you listen back to your music, does that not help you?

It’s more constructive criticism I give myself   But I’ll end up sitting and writing a song, singing half of it and trashing the last half, saying I don’t like that!  I go for five/six days and think I’ll take it out and try and work on it again. 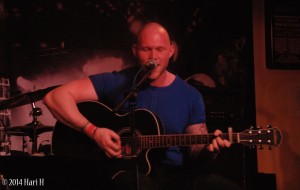 I’m looking forward to hearing it!

Is that your plan moving forward, to move away from “sad” songs?

I want to do more upbeat songs

For instance, here last time when I played, it was very loud, very very busy and I was trying to play quieter songs.  They had Paulo Nutini, One Direction playing and then they had my quieter songs and I didn’t think they were received well. So, I’ve tried to change my set this time to more upbeat faster songs. But not many people are out yet.  Well I hope more people will come,  all at once and stop hogging the bar!

It’s a good idea to mix things up. 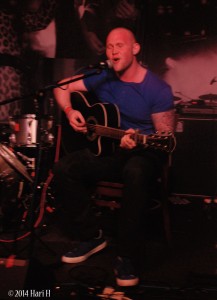 Yea, but, I don’t like writing about happy songs because I never get that happy feel good Pharrell Williams *clicks fingers* type of feeling.

I never get that, It’s more if someone’s really pissed me off, aww I’m gonna play them down, or if somebody’s passed away.  It’s the sad emotions or heartbroken emotions that make me put pen to paper. Like Look to the stars, Too Young, things like that.  That tends to be what I can write a song about.

It’s usually something that happens and then I write a song on the back of it.

Do you think your songs are in anyway uplifting or soothing to listeners?

I don’t know, I don’t get that

Neil gives me good feedback but I think he’s just trying to keep me sweet to play more gigs!

That’s not true, okay final question: If you could have one of your songs played anywhere in the world where would it be?

America!  In Madison Square Gardens or during the Superbowl, that would be amazing,

It would Dave, it really would

Dave, takes his seat on stage, armed with his guitar, he starts his set.  He rolls out the smoothest lyrics to a minimalist scattered crowd in PJ Molloys. Some come down the wooden stairs to get closer, and some stay listening at the bar.  His faster songs do make a change to his set this time, and he seems to enjoy performing his favourite up beat number: Boys Like Girls, that he talked about earlier.

I think the Lochgelly Singer Songwriter has hit the balance just right this time and as I look around, I wish he had a bigger audience.  Dave’s vocal range is impressive; his voice is finely tuned, like a well-connected radio signal, there is no fuzz or white noise, just crisp clear reception. Even at low volume, you’ll hear, there is nothing quiet about Dave McNeil, he might not like many of his songs but like school, he remains a music ace.

Check out Dave’s Facebook and Sound Cloud links below, which includes a Podcast he (kindly) did for EastVoice: