I consider myself a lucky guy. I have a wonderful family and some pretty cool friends. I also have been able over the past few years to photograph and write about some amazing bands. Some people do it as a job, others for kudos, me I do it because I love it and it keeps me sane. Also, call me old fashioned but I try to only cover bands/artists that I like or feel engaged with. It’s not my job, it’s more of a vocation. That doesn’t mean that sometimes I’ll go to a gig with almost no previous knowledge of the band. I like to be pleasantly surprised too.

And so last week I was on social media, posting drunkenly some of my favourite tunes as I do ( I love this music thing so want to share that with you all…) and a message popped up from a friend asking me to come along to the gig tonight. To be honest I had heard of the acts on the bill and thought why not. They seem okay. What have I got to lose?

I did a cursory Yertube search, found it interesting and cleared my extensive diary entries forthwith ( Haircut, football game on telly, read a last chapter of a pulp novel…), went to work and did 5 and half boring hours of “work”.  My evening was now free to go to the gig. As me and some of my friends say “Yaldi”.

I’ve never been in Broadcast before despite it’s close proximity to my house. So when I walked in and a Hen night/Pub golf party was there I felt a slight twinge of uneasiness. This was swiftly assuaged when I went out for a smoke and the football was over. The Hen night/Pub Golfers wandered off down Sauchiehall Street to “party” in other places. I’m sure they had a lot of fun and hope they didn’t get arrested.

In the venue downstairs there is a mix of cool people, cooler people and me, a square dude with a camera. Speaking of cool. I had spoken to Biff Smith from A New International before the gig, he kindly showed me the room before the performance so I could work out my shooting angles. Biff is instantly easy to speak to and very affable and friendly. Also he had to disengage from our conversation to speak to his “Wee Mammy” before the gig. Again, call me old fashioned, but when someone calls their Mother, their “Wee Mammy” I tend to like them. Also in the room is Duglas T Stewart (BMX Bandits) who was the friend who had asked me to come to the gig. His partner, Chloe Philip is the bassist in No More Tiger who headline tonight. Duglas is one of the many people who have done me favours in the past that allow me to get to shows like this. I’m not name dropping by the way, just stating a fact.

A New International may be know by some people in their previous form as The Starlets, I’m not au fait with that band because I’m a square dude with a camera, but I hear they were a rather good indeed. They assemble onstage with Biff in a neckerchief and clipper hat almost resembling  a 1920’s cartoon hero and begin to play. Immediately I’m channelling Jacques Brel and perhaps Django Reinhardt.  A New International seem to favour songs that begin in A minor (which is not a bad thing at all) then swing and sway into almost Gypsy Jazz with an overlay of Violin and Trumpet and some particularly good twangy surfish guitar. Biff delivers torch song vocals which in some parts remind me of Billy MacKenzie (Associates) and Leonard Cohen. If I closed my eyes for a moment, I could swear I was in Paris after the “Great War”. Hemingway, T.S. Eliot, Man Ray, Picasso are all there watching. Young men in the corners are smoking Gauloises and discussing the human condition. I open my eyes and instead it is a basement venue in Glasgow. However the music still seems to swirl around like a ghost of another century, the echoes of which are still hanging in the air above, in the architecture and the names of places nearby. One of their songs tonight – Valentino, could easily feature in a Tarantino movie. It has that same filmic element. In fact many of their songs contain a dramatic theme. Imagine Nick Cave if he lightened up a bit and we are getting close. The whole band are fantastic musically, it is not a one man show but an ensemble piece. “we come here to break your hearts.” Indeed they do with a sophisticated and romantically toned set that enthrals the crowd and a certain square dude with a camera. I’ll not bore you with my take on A New International further, other than to encourage you to see them live, close your eyes, and tell me where they take you. 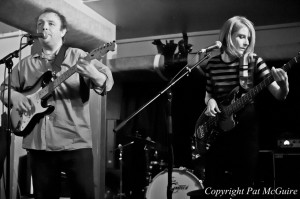 Headliners tonight No More Tiger are also an ensemble group. Sure they have guitar, bass and drums but they also have some odd keyboards and at one point a ukulele played by their drummer Carlo. On one level they kind of remind me of an early The B 52s with their bouncy pop and roll. Maybe it’s Jimmy’s deep voice with Chloe and Flore’s vocals as a counterpoint. However that is just a first impression based on some quick Yertube results. No More Tiger do songs about buses (Bus Song) and the CIA (Company man)  and having a Doppelganger (oddly entitled Doppelganger.) And also one about text/internet language (OMG MY LUV 4U). Jimmy’s sense of humour seeds the lyrics with a witty finesse and makes the gig a very enjoyable experience. At one point from the left of the stage I see my mate Stevie and his mate Dougie dancing away on the right. You know you own a crowd when they are smiling and dancing.

No More Tiger have that nice oddness you get with light indie pop music when it is done just the right way. They might not be to everyone’s taste. But then again not everyone has taste. If A New International reminded me somewhat of Paris in the 1920’s then No More Tiger suggest a more 1960’s vibe. In fact at one point the vocals (on  Hymn) seemed to ping pong from Jimmy/Chloe/Flore almost like an early song by The Who.

I’ve not read any press on the band so my ears were fresh to them. Some people might find their stuff twee or kitsch but I found it quite life affirming. Good music performed well with a clever sense of humour and great arrangements. It’s all about the song and the performance for me, be it punk/metal or pop music. Both bands tonight were a pleasant surprise and left me wanting to see them again. Always a good thing in my book.