A Wednesday night in Glasgow. Sunny and pleasant for a change. Of course I have a hangover and hay fever combo just to make me feel rubbish. I endured work and all its mundane confusion with my sights firmly set on tonight’s gig. Will I feel out of place? Will I stay on soft drinks? Do I need my ear defenders? These are the type of questions running through my head as I got the bus into town, luckily the answer was “no.”

Outside the Venue I meet Den, Lev and Gary from Kingpin (the band I’m here to cover) and had a wee chat. Guitarist Neevo was away trying to find a crack dealer at the time, or looking for a “Ho” or riding a motorcycle away from a bank robbery…or maybe just in the toilet. I’m joking of course but that’s just to invoke a stereotype of Hardcore/Thrash bands that seems fairly common, i.e. That people who play a certain type of loud music are innately crazy criminalists and smoke crack whilst robbing banks to pay for prostitutes. I don’t think Kingpin do any of that though, well at least to the best of my knowledge.

Kingpin are pretty cool guys, I know Den but had never met the others. They are upbeat, a bit cheeky, and full of banter. They are obviously looking forward to the gig and their energy levels are high. I leave them to their pre gig routine (snorting white powder from young ladies body parts…nah I’m kidding) and wander inside to get a beer. The venue is a typical under a bridge space with exotic toilet facilities. The barman is effervescent as I ask what lager they have on tap -“Nane, jist cans.” So I get a Red Stripe with a lovingly prepared rusty lid and sip it warily. I think my last tetanus injection should see me through the night. 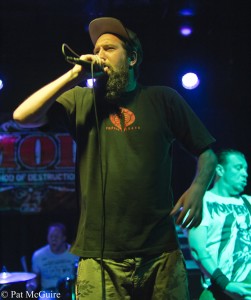 First on are Certain Death, a band from Kirkcaldy who feature 2 vocalists and kick-start the gig with some speedy punky thrash interlaced with a light garnish of rap. Between songs they interact with the crowd, asking who has ever been on the dole before doing “Giro Day” which is a corker of a tune.  Heavy riffage and great dynamics ensue. I almost lose a filling from one of my back teeth when I’m standing too close to the P.A. to get my photos. A small price to pay when seeing a band who really enjoys what they are doing and knows how to work the room. Ideal stuff to make me forget about my potential death from the rusty can of lager and blow my hangover off to F*ck too. I will make sure I catch them again soon. See the links at the foot of the review for more info.

So I wander back outside for a smoke after Certain Death’s set. Feeling more alive than I had 30 minutes previously. Still feeling hay feverish, but no hangover. Maybe rusty lager is the curer?

Kingpin. What can I say about Kingpin? (Apart from their predilection for crime and drugs…again I’m joking, honestly.) I’ve missed a few of their gigs over the last wee while and am really looking forward to seeing them live. Just before they begin and are setting up on stage I sense a quiet before the storm. Lev sits at the front of the stage for a few seconds almost as if he is mentally preparing himself. The crowd seems to get more excited too. A tension is imperceptibly hanging in the air and I get the feeling that I might need to visit the exotic bogs and snort some…sorry have a quick slash so that I don’t miss a second of their set. I also grab a rust free can of lager too. It’s always best to be prepared. 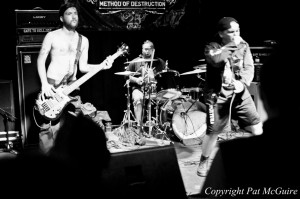 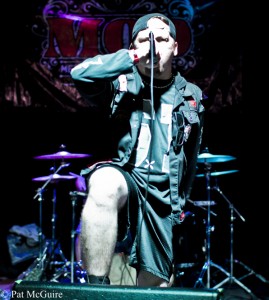 Kingpin do an immense set. Which is no easy feat considering that MoD, the headliners from the USA have not played Scotland for decades. I don’t think it matters to the band too much though as they just get tore in and do their thing. Den underpins their special blend of Thrash/Hardcore with some floor splitting drummage which is almost industrial. Gary knocks the f*ck out of his bass whilst looking carefree and relaxed. Neevo’s guitar squeals and grinds and chugs along on top while he head bangs like a good un’ (so much so that in one of my shots he looks like Chewbacca from Star Wars when the moment is frozen.)  Lev stomps the stage and roars his lyrics. They Serve Themselves is a classic example of how to take speed and energy and release it an sonic explosion that f*cks up your eardrums in a nice way. By that I mean when you find yourself walking along the street the next day and a bus or train passes close, and you think of the drum fill that would signal the tempo change. 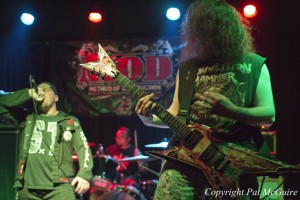 Last Warning from intro to the end invokes dark metal/thrash/speed punk and is angry and still structured. Almost like a Greco-Roman statue with a bearded philosopher looking a bit pissed off. Speaking of being pissed off, Lev’s face seems to signal anger and disdain but I read it more as concentration. It’s a totally physical performance and the way Kingpin use the stage is a workout in itself. Gary at one point takes off his top. No doubt for the ladies in the audience (there were some, it wasn’t a total sausage fest). Neevo seems to be wearing multi coloured surfer shorts too. Maybe he is going to a narly skate party later? And Bitches Leave (Think Robocop, not misogyny) is wry and heavy in equal measures. I’d heard the demo before, but live it really takes off, I hear an echo of Beastie Boys Sabotage in the first section, but you may not. Either way you have 20 seconds to comply… 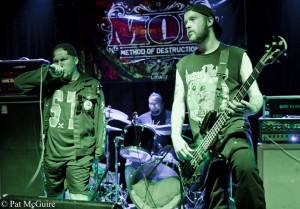 Kingpin have tons of gigs coming up, check their page at the bottom of the review for more info.

And so, Method of Destruction are on next. I grab a smoke and let my camera cool down as I’ve taken too many pictures and had to change memory cards mid set too. I get back to the bar to get a can of lager. I speak to a few people who have especially come to the gig just for Method Of Destruction. It’s a huge thing for them as the band have not played here for decades. I’m a bit off the radar for the band so claim no previous knowledge whatsoever. I did do some research though, just the usual Yertube searches. I liked what I heard musically. Also the band were either inside or outside the venue most of the night. And New York accents are not too unusual in Glasgow anyway. I think I nodded to the drummer a few times whilst the other bands were on, he looked a bit like a mate of mine from Boston (The City in the US, not the band called Boston…) and Billy Milano and the others were watching the support acts too at the back of the venue.  Their brand of raw thrash erupts and a mosh pit develops. I don’t know what their songs were called to be honest but going by the crowd reaction they played their back catalogue as well as a few from Milano’s previous incarnation-Stormtroopers of Death. 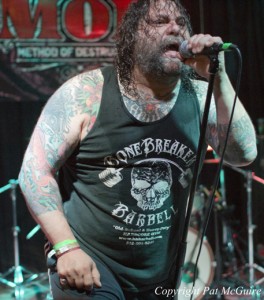 He quipped in between songs about not knowing whether to eat or f*ck a haggis (so he did both) and has the type of larger than life charisma that makes a great front man. The band are no slackers either (despite being from Austin, Texas) and kick arse and bring the night to a close. The smell of sweat and denim and leather probably still lingers in the venue.

Tonight was a perfect gig in that all three of the bands all brought their own take to a similar genre, technically you couldn’t put a sheet of paper between them. I had a great night and wandered off home with my ears ringing. Great stuff indeed.