I was invited along tonight by the lovely Laura Scott of the Scottish Tour Collective who co manages the headliners tonight: Rank Berry. As I was working until 9pm I missed the support acts in full, however it seems one of them didn’t make it so Wesley from One Last Secret was called on to do an acoustic set instead. The other support was from Deadbeat Ragdolls and whilst I only caught their last 2 songs sounded like a band I might look out for in the future.

I’m accompanied by “Half Day” McVey, a friend, co worker and one part of a mysterious music duo called….well I can’t tell you that or it wouldn’t be a mystery would it? We meet Laura outside and have a chat and a smoke then head in for some nice lagers to try to chase away the memories of our previous shift at work. I’ve covered bands at Pivo Pivo before and it’s a nice wee venue. This doesn’t stop me from getting lost on the way to the gents though. Only half a pint of lager into the night and I’ve lost my bearings already. Things could get tricky. 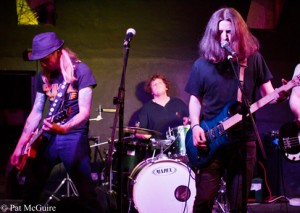 I set up my camera for the venue and Rank Berry take to the stage. They are a 4 piece from Dumbarton who use the conventional rock band set up, 2 guitars, vocals, bass and drums. I notice right away that the bass player Marc Doherty is wearing the same Ramones T shirt as me (albeit in a different colour). 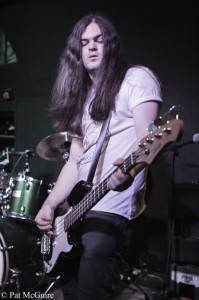 This bodes well I think. Fair enough the lead guitarist Brian Kerr is wearing a Kiss T shirt, but at least he is not wearing make-up. Singer Jamie O’Donnell has that Jesus look, a bit like Samaras does, it’s the beard/hair combo.

Their drummer Grant Dallas exhibits that manically possessed appearance common amongst guys who batter their instruments for a living. It’s all good though, this is what Rock n Roll is about. A dynamic between band members that pushes its way into the music and out via the PA to your ears and crashes into your brain just in time for your eyes to tell you it’s on its way. 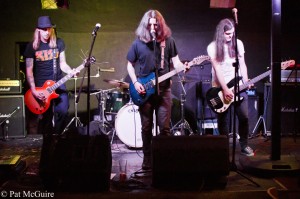 Rank Berry do Rock n Roll like a bar band would in the southern states of the USA. I grab a JD and coke to help that mood along, and also because the lager is just not doing it for me. I’m taking pictures and also making notes on my phone, whilst drinking JD and Coke, knowing where the Gents is, and talking to “Half Day” McVey. Multi tasking like a mofo so to speak.

The band are tight and obviously used to playing live. They have done larger venues than this in the past so a smallish venue is no issue to them. It might also explain why the lead guitarist would leap off the stage and do a circuit of the venue now and then to give his wireless kit a workout. This could have ended in tragedy as one of the bar staff moved a table back to the adjoining alcove near the end of the gig, but he spotted it just in time. 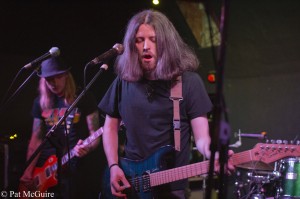 The band deliver a tight set with perhaps too many cover versions for my liking. They do The Faces “Stay With Me” and also “Crossroads” the way Cream did it. I was impressed with their cover of “Fortunate Son” by Creedence Clearwater Revival though. I guess my take on cover versions is that it’s more interesting to take a song that is not in your particular musical genre and make it your own. That is just my opinion though. On the bands own songs they do a great job. At one point Grant uses cowbell. And we all know there is always room for more cowbell. I’m not knocking the band at all by the way. It takes time to learn and play together and maybe if I caught them in a larger venue there would have been more audience feedback too. That loop you get when the audience are up for it and the band responds and the audience get more into it and so on. Perhaps too, if I was just watching the band instead of taking notes and photographs it would have been more enjoyable for me.

The last song “Good Times” just about takes us to the curfew. With that brilliant crescendo you get at the end of Rock tunes. You know the one with the fills and rolls and hard major chords ringing out on the guitars until it crashes to a stop.

Rank Berry are a decent band, maybe I caught them on the wrong night for me. I will go and see them again just as a punter to see if I get more into it. I’ll never knock anyone that takes to a stage and plays to an audience live. It’s an investment in time and money to get to that point. Anyone that does that has a special place in my heart. Go and see them live and find their stuff on Yertube and make your own mind up. I’d say good band maybe just the wrong night for me.