I was sadly unaware of Jamie Coleman until fairly recently. I was at King Tuts to cover John Lennon McCullagh and Jamie was one of the support acts. Due to family and work commitments I didn’t have the time to cover his gig then but I got in touch with him via Facebook shortly after the show and he has kindly invited me along to see him on Friday 18th at Pivo Pivo, Glasgow. 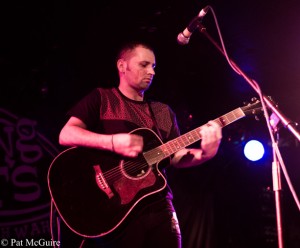 Jamie is from Clydebank and plays a nice mix of indie/folk/blues infused acoustic songs. He toured with John Lennon McCullagh (hence the King Tuts show) and also has some great support slots and headline shows coming up soon. I’ll cover them when I do my review of his gig on Friday, but one in particular that makes me wish I could play some songs as well as he does is his upcoming support for John Power ( Cast / The La’s ) in Kirkcaldy in May.

What music is essentially about is the songs, and Jamie’s music is all about that. Voice, acoustic guitar and some harmonica to spice up the mix. And while that dynamic is nothing new, Jamie puts his own flavour on top. Written from the heart and delivered with passion, what else could you ask for?

Friday night at Pivo Pivo, Glasgow, Jamie Coleman is on the bill along with The Beat Movement, Joe Symes & the Loving Kind, The Clocktower, Jamie Reilly and Vida.