It’s a wet and pretty miserable Thursday in Glasgow, doubly so for me as even my usual tipples are just not moving a bug I’ve had most of the week. But I carry on gamely and switch from lager to rum and coke. It helps a bit but maybe what I need is a secret ingredient to chase away the tiredness and general downer I’m on. As it happens there might be a cure involving more rum and coke and some good live music.

I’m in a packed out King Tuts bar waiting for the doors to the venue to open. There is a sense of energy in the air, something good is going to happen. So I have another rum and coke and try to let the ambience soak in. I also think to myself, Kilmarnock must be desolate tonight because most of that town are here. The headline band is The Parlotones ( from Johannesburg, but now based in L.A. ) who have played to huge audiences worldwide and are an amazing band, but sadly, they are not from Kilmarnock.

A band that is though is One Last Secret. And they are who I’m here to see tonight. As yet unsigned ( but maybe that will change soon ) they do a great line in melodic power pop/rock which is the ideal thing to beat a rainy night in Glasgow into submission. It worked for me in any case, I felt much better for being there. And before I get to the gig review proper, I need to mention the opening act : Huevo and the Giant. A young band who had no song titles as such but despite some technical issues opened the night and should be a band to look out for over the coming months. 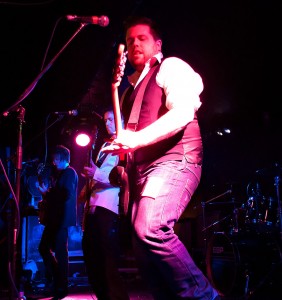 One Last Secret describe themselves as “Rock Pop Sexy” which is not a genre I’m familiar with. They are Rocky and Poppy and I guess sexy to the ladies (or even the guy who was feeling the drummer Darran’s arms outside the venue). I hasten to add that Darran was waiting for his girlfriend and not expecting to have his muscles massaged, but if you are in a band you need to expect some kind of tactile interaction at gigs. 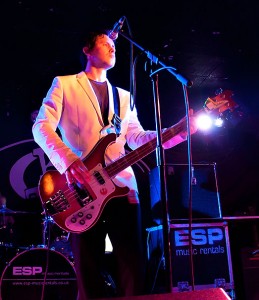 Taking to the stage with singer/bassist Wesley wearing a dapper white jacket and they tear into their set and get the audience going nicely. However they too are beset by technical issues soon. Fraser’s guitar needs replaced so their manager Laura has to run up the back stairs to get one from The Parlotones and almost breaks her leg, that’s what you call dedication. Meanwhile the band do an impromptu cover of Queen’s “We Will Rock You” to keep the show going. Soon as the guitar issue is sorted, they get back to the set which is punchy and solid, Liam with his blonde modish hairdo on the left of stage seems to almost invoke Thom Yorke/Brian Jones in his demeanour. The band look “cool” which is one thing, but they also sound “cool” too without appearing as if it’s an affectation or a put up job. And to be honest, if you come from Kilmarnock you won’t get away with just looking good. You need to back it up with talent. 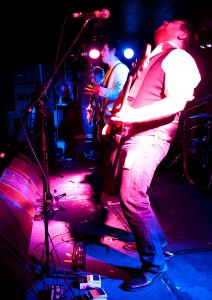 As I’m not on camera duties tonight, Derek Fowler is, I have to watch the rest of the show from the bar ( poor me…) as the place is jammed tight with fans. There is a live video feed and I can still hear the band via the P.A. system. It’s not where I prefer to see a band from, but the place is so mobbed I simply couldn’t find a spot to watch and take notes. They had sold out their ticket allocation and left Kilmarnock empty and filled King Tuts for a support slot. No easy feat for an unsigned band. There is banter “This song is for Stuck up bitches”. And people dancing at the front of the stage. One Last Secret deliver some great tunes live and look like they were made to play in larger venues too. Their finale is the brilliant “Coral” which is my favourite song so far from this band.

My overall impression on seeing them live is that they could be great if they keep up the obvious musicianship and writing skills they have. This year could be theirs if they take it. When you are this good you don’t need to keep it secret, even if it is your one last secret…

One Last Secret have some gigs coming up soon :