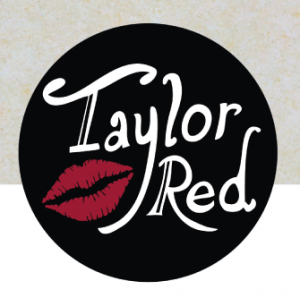 Nicola Taylor, Chris Taylor, Gavin Paterson and Bradley Smith* make up the band Taylor Red.  The band offers an array of musical talent that suggests one thing. Perhaps we’ll be sick of the name Taylor Red but sick of the music they produce? I doubt it, very much.  On Saturday 21st December the band take the main stage at the Glasgow O2 Academy. The name of the event is Futures Fest 2013, this looks promising, I decided to find out more. 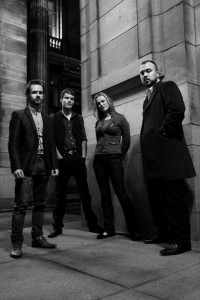 Tell me how you went from a brother and sister writing songs to forming the 4 piece that you are now.

Nicola:  Well Chris and I have been writing since we were about 13. It’s been a long period of time! As we got older we’ve had loads of different line ups, in different groups. None of them worked out, we got to a point where things had to get more serious. We wanted people to be more committed.

Chris:  Wanted to be more professional

Nicola: We wanted people to have a more positive attitude. We found that within the last year.

You’ve got quite an eclectic sound based on your own description:

‘Their material very melodic and harmonious yet combined with rhythmic sophistication to create a style which features the simplicity of pop music, the rhythmic diversity of funk and the hard hitting edge of rock.’ – www.facebook.com/taylorredmusic/info

You’ve released your EP on iTunes as well as numerous singles and fans are growing at a rapid rate. Within one week fans have grown from the 800s to the 900s and not long till you reach the 1000 fan mark. How does all that feel?

Nicola: Really exciting! Never really had this before and it’s so good that so many people are kinda checking out our music and liking us and want to come to gigs. It’s quite kinda overwhelming. It’s taken us a long time to get here so we really appreciate it.

Any tracks that are quite significant made for a specific purpose or inspired in a unique way?

Nicola: Yes we’ve changed our route, we’re not pigeon holing ourselves, we just want to try anything, and just whatever comes to us that sounds good. 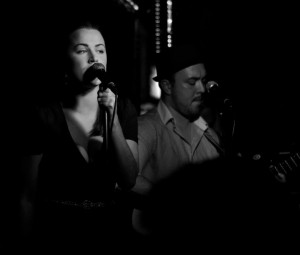 Do you have a target audience or is your music aimed at everyone?

Chris: It’s for all but our target audience, it’s actually Facebook that have done it, is between 18 and 22 roughly.

But it’s open for everyone.

Do you carry any notebooks around with you like other bands to note down ideas for songs?

Nicola: Yes, yes! Chris is really bad for it; Chris would just turn up and say I’ve just got this bit of paper here and here.

And you have to try and work out what it says?

Your last two tracks, ‘Wake Up Alone’, ‘Chameleon’ are completely different from each other.  I also noticed you did a cover of ‘Can’t Hold Us’, where you are MCing as well!

Nicola: It was just one day I kinda said to Chris, I heard this song on the radio and I said I really like that, I’ll try it. Chris said: “why don’t you?”  So it was really just trying anything and just going in a different direction.

It definitely shows off your versatility which is brilliant again

Chris: We’re thinking of trying some gangster rap next! *laughing*

Who are your musical influences?

Nicola: Aww too many to name, far too many. Think that’s why we can’t stick to one style.

Who would you like to record with or jam with if you could choose anyone?

Nicola: Personally, Jessie J but that’s just me and White Snake as well

Chris: Michael Jackson, if he came back we could recreate Thriller!

Some of the Bee Gees as well! *laughing*

Am I right in saying 50% of your sales go to the Charity Water (through reverbnation):

Chris: That’s right yes, through reverbnation and basically for every single you sell 50 percent is donated to charity**. It’s the water charity in Africa. I just thought, why not?

Nicola: We’re not really fussed about making money, there are so many people that don’t know us, and we’re not really that well known. It more just about kind of getting out there and for people just to listen to us

Chris: At the moment!

Your upcoming gig on 21st December is called ‘Futures Fest 2013’. Tell us more:

Chris: It was through Box Glasgow, we’ve played there a few times. Our names got pushed to the front, it was by competition and we got asked to play it.

How did that feel? 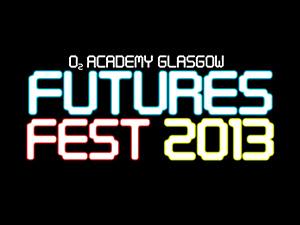 Tell us what to expect and what you’ll be bringing at your gig?

Nicola: Gonna do all the songs we have recorded which is on our SoundCloud and our Facebook. It’s a 7 song set and we’ve got 2 covers, 2 surprise covers, nobody else knows what they are…. Other bands like Sergio Sergio will be playing as well.

Anything you want to say in association to Scotland and being a Scottish band heading towards the mainstream?

Nicola: A lot of bands have lost faith; we’ve just got this inner strength though.

Chris: We’re gonna bring it back!

Nicola: We’re gonna bring it back and really go somewhere.

Chris: There are a lot of great unsigned acts and bands in Scotland but we’re gonna try and push it! Gonna try and get up there you know.

Are you looking for a record deal?

Chris: We’ll try and get some good support slots and work our way up. Just doing it the honest way you know. It’s a slow game…

What’s it like to be on the Taylor Red bandwagon then?

Gavin: Great, been in loads of bands and this is the only one that has actually gone anywhere.

Nicola:  Makes it more exciting and fun to work together.

So you bond well together?

Chris: Kinda got to that point now, we’ve went through a lot of different members and messed around so now it’s kinda this solidarity, we’re in it together. Just the way it is aye, it’s good. 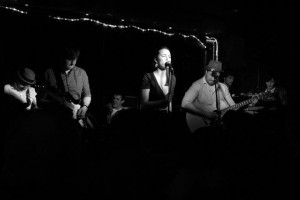 Where do you guys see yourselves in 5 years’ time?

Nicola: Touring all around the world!

Chris: Pretty much feel the same; I don’t see anything stopping us. A top 40 band!

Any words of wisdom you want to give to future bands?

Chris: Stay out of music cos it’s ours!! *bursts of laughter*

Chris: Look out for us next year because our manager Chris will be sorting us out with couple of tours.  We’re gonna be here there and everywhere!!

Manager: You’ll be sick of the name Taylor Red!

I look forward to you bringing as much energy to your gig like you have today. Thanks Taylor Red, see you on the 21st!

They really are Chameleons, Chvrches watch out; this lot are hot on your tail! I’m looking forward to watching Taylor Red unfold on the big stage. Come and join me in celebrating a band that is accelerating at a rapid rate. They’ve surprised, delighted and overwhelmed me. Thank you again Taylor Red, see you on the 21st!

Singles and the E.P. are also available to buy and download  from ITunes

*Bradley Smith was not available at the time of interview

**Any band that uses Reverbnation’s Music for Good feature gets to choose 1 of 13 charities, where they can donate half their sales.