I’m pretty sure that in days to come people will talk about seeing both these bands either at this gig tonight, or gigs in other places. Memories will kind of mash into one huge performance a bit like when you try to recall a football game or a great party. People will get the set and who was there mixed up. Was it a Friday or a Wednesday? was it Glasgow or Gourock or Kirkcaldy? But it won’t really matter in the end. In a few years time both these bands should be playing venues that are huge enough for the memories of tonight to be just distant and fleeting. But for a happy few of us who were there, they will be as precious as gold dust.

Every gig is special to the audience. Things happen at gigs. Bands form, people fall in love, people fall out of love. Some people make new connections. All while the bands are playing. It creates a mood and a timestamp for folk to remember years later. Live gigs are the main reason that music exists. Sure CD’s and Records and Digital downloads are great, but they ain’t anything like a live band playing right in front of you. You need to feel the music in your ears and through the floor to really appreciate it. While the band is a few yards in front of you doing what they do.

There were other acts on the bill tonight, but I was here to do pictures of  The Beat Movement and Jamie Reilly and The Groove Allegiance. Both are bands that I have heard before at a sound check earlier this year in this very same venue, but had to leave to go to another gig before they played.

So…even though I hadn’t planned on doing a gig review, I felt compelled to do one anyway. 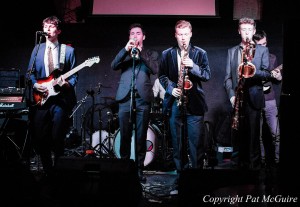 First up Jamie Reilly and The Groove Allegiance. If you like your soul and funk with a nice bit of earthy groove too this is the band for you. Jamie is a young guy with an excellent band. He always reminds me a lot of Eric Clapton before “The Beard” (Remember when Eric was brilliant?) I really think the venue is too small for this band. The actual out front sound is great, but there are eight people on stage and the PA stacks hide some of them. It’s great to see a band all standing together but a venue with a wider stage would perhaps give more impact visually for this ensemble. Still they deliver in spades tonight. A totally professional and soulful set pulsates to the crowd and gets us all going nicely. Not a support act or a warm up band, these guys know how to play proper music. As cramped as the stage is they still show a lot of flair. I’m not usually into a band having a “uniform” or an “image” but this time I’m willing to make an exception. Talent abounds and I’m sure that when they get their break on bigger stages and on Telly their look will be something that people get. Musically they are superb. They should be on TV already and selling tons of records, but the music industry is generally too busy ignoring bands like this and pushing X Factoresque rubbish to the masses. They will have their day though, I just hope it’s sooner rather than later. 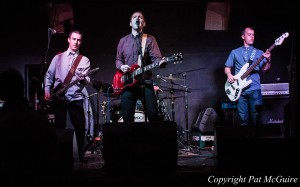 The Beat Movement are the headliners tonight. Another band that I’ve only previously heard live via a sound check. I’m glad I get to see them tonight as I had done a photo shoot with them last week and found them engaging and quite affable guys. When they take the stage, they really take the stage! By that I mean a bunch of guys you have been chatting and having a pint with, suddenly become a fekkin’ band onstage, tearing it up and giving it laldy! A few chords and a slight rumble from the drums and then…..instant Rock n Roll with a 60’s twist! It’s almost an immediate metamorphosis from four individual people to one entity. Sharp and stylish music with more than a wee nod to the Mod ethos, but at the same time with a lot of ballsy blues and indie going on too. Stage presence just seems to happen with these guys. It’s loud and structured and kicks you in the teeth like all good live music should. Almost like an early Small Faces gig, or perhaps The La’s when they were at their peak. It’s all great stuff. They have a definite buzz going on right now mainly due to them being an excellent band, and also as they have an EP coming out soon. (see their Face book page for info soon…)

Live The Beat Movement are note perfect the way that only a band who puts the work in can be. And that is heartening to me. I’m not anti electronic music or studio bands at all, but I really admire bands than put the effort into their music so that they can produce live just as well as on record.

I see great things on the horizon for The Beat Movement if they keep up their hard work, keep gigging and recording, and keep on keeping on.

Jamie Reilly and The Groove Allegiance