A simple enough line at first glance, but one that comes back on you decades later. Even if you didn’t write it you, if you are a human being, may be able to relate to it. I’ve found it resonates for me often. Every time I make a change in my life, everything flows.

Friday night at the recently refurbished Kelvingrove Bandstand being a case in point. The last time I was here it was derelict and full of scrubs. I took some photographs and my daughter said it would be a great place for bands to play in. Even as we both gazed into the rubble and rubbish below the stage she was as sure as a 10 year old can be, that this place would be a great venue. That was two years ago. I didn’t mention to her that I had seen bands playing there decades before she was born, when it was still a nice place and the stage was solid. The seating was still basic, almost like a Greek amphitheatre but it was a nice place to see bands. I can’t remember which bands exactly back then, but that doesn’t matter. The fact that this place is now a venue for bands is important.

Tonight we have something excellent and special. And this is even before Teenage Fanclub play. The support act – Linden. 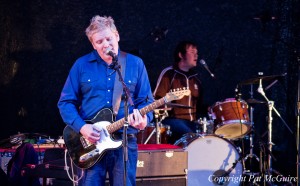 Joe McAlinden has been a Boy Hairdresser, a BMX Bandit, A Superstar, and now has recordings produced by Edwyn Collins with a Sex Pistol playing drums on some of his stuff  (Paul Cook) and creates a wonderful hymnal presence as Linden (See what he did there?). Featuring members of The Wellgreen in his band he takes the early evening crowd on a melodic trip through his musical adventure with gloriously uplifting songs with amazing grace. There are nods to the classical frame as well as gentle pop themes as Joe and the band create some fantastically evocative music. Gentle hooks and phrasing on guitar and Rhodes keys set a great mood tonight. Ascending and descending on “Brown Bird Singing” for instance. Personally I’d love to see Linden in a more enclosed venue just so we could all enjoy and focus on what they do so well. Sublime greatness sometimes runs under the radar. Linden are great, adjust your radar and pick up on them please.

It starts to get dark in the bandstand. Dusk is settling over Glasgow. The queues to the toilets and bars seem a bit longer than before. I’m trying to have a smoke and use the facilities so that I can get my camera sorted for the main act. As I walk back down to the stage area there is a kind of electricity in the air, some of it perhaps from cider or lager, other parts just from a pensive excitement. As I trip then regain my footing, I notice that the place is mobbed. Since I went for a smoke it seems like all the vantage points I had scouted are now full. So I rush as fast as a 45 year old man can towards the stage whilst trying to retain at least some small part of my dignity. Of course I fail, and end up out of puff as I get my camera out and insert a blue extra chewing gum in my mouth. I’m nervous because I want to try to get some decent pictures and I’ve not seen Teenage Fanclub live since The Leadmill in Sheffield in 1990 something….

I manage to get into the photo pit with some time to spare so I mess about with my camera to pass the time and somehow appear as if I know what I’m doing. The fact is I’m more nervous taking pictures of bands than I ever was when I played in one. But that nervousness is good, it means I want to do it, it’s good nerves. I thrive on it.

Teenage Fanclub are playing in the Bandstand at Kelvingrove. Get that into your head. Two years ago I was doing black and white photographs from the stage that they are about to play on.  The place my daughter said would make a good venue. It of course looks a lot better now and it is full to the brim.

Teenage Fanclub begin with “It’s All In My Mind” and I’m still thinking it is. But I keep trying to take pictures anyway. I do my pit pictures, catch a breather and head to the sides to soak in the music and chew more gum. I’m scanning the crowd too and see so many familiar faces.  “I Don’t Want Control of You” floats over the audience with smiles and people singing back to the band and I’m feeling wobbly and emotional. The stage lights are scanning the crowd too. A nebulous feeling of togetherness is happening and it is wonderful. The rest is a bit of a haze for me as I try to get some long shots of the performance. I meet and say hello to folk I know and they say hello to me too. 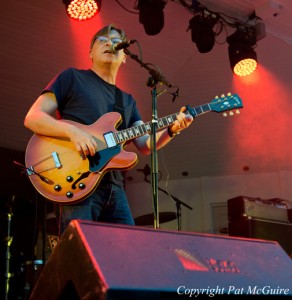 You could say the gig was done in three parts, a bit like a symphonic review. It began mellow and light, the in the mid part it picked up on tempo, for the end part it really took off with “I Need Direction” which was a surprisingly beckoning song to draw lots of folk to the front of stage but it did. The Middle Aged Fanclub got off their seats, abandoned their wives and children en masse and began to mosh like it was the early 90’s again.

“Sparky’s Dream” took people to another level. One of the security guys started dancing to that at the back. But stopped when he saw my camera. Sorry man. You should keep on dancing.

Then “The Concept” happened. And I think that if there was a roof it would have lifted off and flew over the City spreading it’s slacker drums and bendy twangy guitar greatness like Soma. The outro to this song is an anthem for lost love and failed relationships and general sing along tunes no matter who or what you are.

Teenage Fanclub leave the stage. The crowd start chanting for “The Fannies” which is an endearing term but not one you would use out of context perhaps. After a slight pause, the band return and treat us to three more songs, the final one being “Everything Flows” Which results in some people stage diving, and falling over the stage barriers. All in good fun I’m sure. At this point I remember joking with Alan Clarke of East Coast Defector earlier in the week about meeting him at the front for a stage invasion. Is that Alan’s legs I see being held in the air by two security guards? I’ll need to ask him later. I chickened out of course, I’ve already tripped up once tonight, I don’t want to put my back out…

The experience was uplifting and life affirming. A special gig in a special place in our special City. I saw many people I’ve know through bands and gigs over the years as well as lots of new faces too. Teenage Fanclub have that effect on folk that makes them feel close to each other. On the way home whilst standing at the bus stop as the crowd drifts past I hear one group of people talking about the concert. “Did you see that old guy with the camera tripping up?” As they walk by laughing I’m thinking “another one?” Then realise it might have been me.

And as I said at the beginning of this review…