Without a doubt Russell Brand’s comedy, if you were able to define it in such a brief statement could be described as outrageously unique. However, this has never been more true that it is with his most recent tour ‘Messiah Complex’.

Watching his latest work at Edinburgh’s Usher Hall, it would be fair to say Brand has swerved away from his well known focus; himself and tales of his whirlwind lifestyle, drugs, debauchery and sexual excess. Not to worry though, there is still plenty of original outlandish Brand! However, it could be said a new style is defined and exibitionist Russell becomes somewhat secondary to a different brand of comedy. 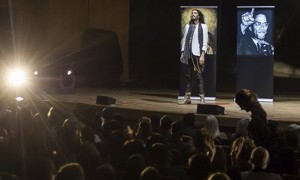 In his new show Brand tells of his four heros in life and the way in which he believes he shares a likeness to each of them in a different way, Is there another comedian on the planet who could get away with suggesting that he or she has similar qualities to none other than Gandhi, Ché Guevara, Malcolm X and yep, you guessed it, Jesus! I think not! Nonetheless, Brand provides a packed crowd with compelling and utterly hilarious evidence to support his claims, leaving not a moments silence throughout his set as the Usher Hall comes alive with an energy typical to all of Brands’ shows.

Perhaps one of the best features of the show is that it strongly highlights another side to Russell, an eccentric character who is renowned for being depicted negatively in the media for one reason or another. We are reminded of Russell’s capacity for depth and intellect as he portrays a fantastically informative and well researched basis for his show, The topics he uses are current and connect with the audience, even encorporating some Scottish humour. This cleverly thought out narrative asks the audience not only to laugh but also to think which is perhaps what makes it easily Brand’s best tour to date. 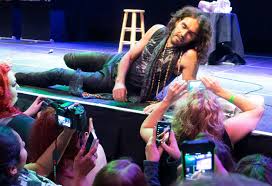 Russel Brand is rather like marmite. You either love him or hate him. If, like me, you are one of the ones who love him, this show will not disappoint. Don’t hesitate to get your ticket for ‘Messiah Complex’, I guarantee you’ll to leave not only with sore sides and a huge smile on your face but also having learned something along the way!