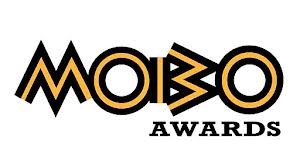 Now I know the Mobo Awards isn’t exactly Scottish, but this year, as it was being hosted in Scotland at the brand new SSE Hydro in Glasgow I just couldn’t resist the temptation to kill 2 birds with one stone by going to see this excellent event and stealing the chance to see the magnificent structure that is Scotland’s newest live entertainment venue, the SSE Hydro! So tickets were procured for the event’s “golden circle” which, being situated directly in front of the stage was, for me,  just the place to be! 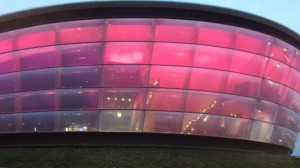 On our arrival at the Hydro the domineering structure really tickled my fancy for architecture, such a stunning building, it seems to reach out and draw you into its rumbling belly with its magnificent lighting constantly changing colour while revealing little glimpses of its interior through the completely glazed  sides of the structure, which I found very alluring and was quickly drawn inside. The allure ended there, disappointing is a kind word to use for this badly finished concrete lump. I saw badly finished floors, stairs, walls, Rails and more around the outer circle which I was not expecting in such a modern newly finished building. A shame really but then I suppose the Arena is the most important part and not the outer circle. 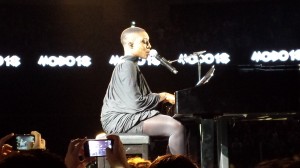 I decided to get some food while inside and, to my dismay found the choice was very limited, I opted for a simple cheese burger which cost a whopping £6.50 and wasn’t even hot but only slightly warm, more disappointment. Their drinks weren’t cheap either making for an expensive evening once you are in there. Whatever you do don’t get a drink and some food at the same time in the Hydro or you will be left with both hands full as there was not a lot of places to put anything down and not a single table to be seen, once again thats not why we were there I suppose but from what I saw the food side of things sure didn’t match up to the information on their website. 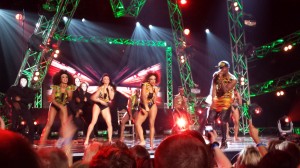 Into the arena we went  and immediately the hydro was redeemed, wow, just wow. What a venue, up there with the likes of the 02 arena and London’s Earls Court. It is an enormous space set out over three levels of which the first and second floor are fully seated and from what I could see they could do as they needed with the massive space that makes up the ground floor where, for this event, they had set up behind us in the “golden circle” the obligatory VIP tables and there was some more seating behind the tables. 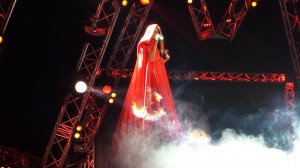 The show Started to a far less than capacity crowd and yet more disappointment on hearing the first words, or rather not hearing them, unbelievably I could not make out a word that was said due to extremely poor sound quality all we could hear was muffled babbling no actual words could be deciphered. Thankfully I could see the autocue for the stage allowing me to see what hosts for the evening Trevor Nelson and Sarah Jane Crawford were saying, but this arrangement did leave me with my back to the stage at times as the autocue was behind me, I was told after the show that the audience members further back could hear better.

However, the show was underway and the first act rudimental did not let us down particularly when Ella Eyre joined them on stage for a blinding performance of hit “Waiting All Night” which for me stole the show! Emma was just superb giving her all in a very energetic performance, What a voice she has too, which gladly I could hear. I won’t list all the acts here as I recommend you watch the mobos on BBC iplayer if you haven’t seen it already. You can hear it fine on your telly and you can tell see for yourself just how good the acts were. 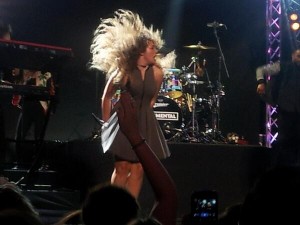 Now to be honest as the awards began to be handed out it was very difficult to keep up, between the essential taking of pictures and reading of the autocue, due to still not being able to make out a word the hosts said which really was a shame. I heard a lot of people saying the same thing in the area we were in, indeed some of the people I spoke to left not knowing who had won what, perhaps a cunning plan by the BBC to get us on their iplayer. In the end however after missing a lot of action on the stage in favour of the autocue I did get a wee list of the winners and nominations together.

All in The Mobo Awards 2013 was a unique experience which I enjoyed from the moment the show began, All the artists that graced the stage that night were excellent and in my opinion were worthy of the honor of playing at such a ceremony. And hats off to the organisers as the show went off without a hitch unless you count the fact that some of us couldn’t hear. It was an experience I would highly recommend to anybody who is a lover of the live, just like me. And we will just have to hope that they see fit to finish the Hydro’s interior off sometime soon and perhaps keep the burgers hot! 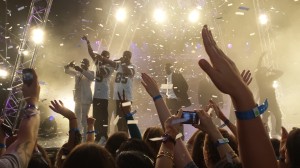