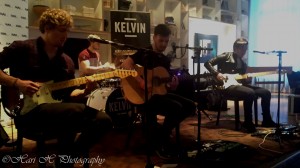 If you are looking for a new anthemic indie rock band dripping with Glasgow appeal, then look no further, Kelvin has arrived!  And with support now coming from Simple Minds, you should definitely keep an eye on this lot!

Giving up their jobs and sticking a fork in the ground, the lads planted the seeds that would allow them to flourish. Kelvin has been grafting within the live music sector in Glasgow and beyond since 2013.

Sounding incredible with newfound signature style, their hard work seems to be paying off as they’ve captured the attention of several influential bodies, including Jim Gellatly. 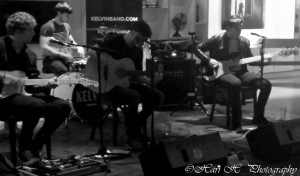 Also, Simple Minds gave Kelvin a shout out and recommendation on Social Media yesterday morning, Kelvin reported this was an ‘unbelievable honour.’

This follows on from months of gigging, getting on national TV and being featured on local radio.

Specifically, the above mentioned include: Kelvin playing a live set on STV Glasgow, having their band story aired on Clyde 1, completing an Irish Tour, gigging in several cities from Dublin to Galway, taking  over a stage in Manchester, Liverpool, Luxembourg (!), Edinburgh (Sneaky Pete’s) and several places in Glasgow.

One of their most successful gigs was at King Tut’s Wah Wah Hut (King Tut’s) when they supported Darlia.

With a great response at King Tut’s the first time round, they’ve been booked back in. This time Kelvin will headline and play out the final night of the King Tut’s Summer Nights Festival on 30th of this month!

I eventually caught up with the fast movers in the flesh when they headlined the SAMAs (Scottish Alternative Music Awards) 2nd acoustic showcase event.

Their set followed on from 3 other fantastic acts:  Josephine Sillars, Michael Cassidy and Gerry Cinnamon (Gerry also played the T-Break stage at T in The Park!)

Connor shared his feelings about being part of the successful SAMA experience:

“Exciting man, really cool to be part of it, there’s a good atmosphere”

“Michael Cassidy and Gerry Cinnamon are great, it’s good to play beside these guys and get into the Scottish scene a bit more. “ 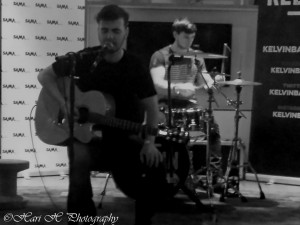 So when seated on the ground floor of the Citizen M Hotel, Kelvin played us 7 tracks.

Debut single Punching Bag was one of them. It’s a confident rhythmic melody interspersed with hearty bass lines, ratcheting drums, the lyrics alone are worthy of whistles and gushing cheers.   Hard hitters like Bloodlines pull at the senses and smacks you with compassion; it’s another great representation of Kelvin.

Fast Track Ways also featured and is a favourite; this is a song that covers the intensity of soul breaking moments being flipped into something good. Turning things around and going from pain to power.

I also think Kelvin is a band that has sought out the power in what they do, found their voice and strengthened it for the good of their main mission. I love how each song has an intriguing story, but this one and its lyrics ties in quite well with overcoming adversity and winning an internal battle.  Fast Track Ways is just one of many anthems in their superb set list.

I could sum up Kelvin’s sound as tall glass of hot chocolate: rich, filling, and deliciously smooth on the ear, and of course damn hot.

The acoustic set really does do them justice, and brings the depth of Kelvin’s sound to the forefront.

So it’s no wonder their full throttle gigs sell out!

One year in the making and the differences between their performances when I first saw them then and now is striking: noticeable in tone, audience interaction, and vibe.

Front man and lead singer, Connor, definitely has a persona that translates well at gigs.

Interacting with the audience included asking if ‘Man in the hat’, liked what he was hearing. And before, ‘Begging and Pleading’ started; Connor suggested those that had been dumped leave. 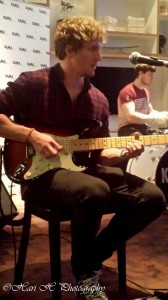 Their set had a cool, friendly, responsive feel, more so compared to the Luxembourg audience who I’m told:

“…didn’t know what we were talking about”, Connor.

Despite the language barrier, Kelvin must have impressed, as they have been asked back! Although a second visit may be on the pipeline after the band completes their summer gigs.

Because not only are they headlining and closing out the King Tut’s Summer Nights festival on 30th July, they are planning on releasing their single in August, and will also go on a single tour in October. And I was given further news regarding their support slots later this year.  I can confirm the acts Kelvin will be supporting are BIG. Definitely check back on their Website and Facebook/Twitter feeds for updates!

Impressed with their work ethic, fantastic songs and slick style, advancements can be put down to the whole team, but most importantly I believe their manager, Marc McStay, is pivotal to Kelvin’s success. The Playlist Unearthed founder is leading the band in all the right directions.

With his finger on the pulse, Marc contributes to the music scene in a major way, and helps others in the business where he can.

With eye-contact you can’t fail to comprehend as business, Andrew, Bradley, Connor, Michael and Marc know the drill.  You get the feeling Kelvin is in training for a huge event.  A certain level of respect is felt through the atmosphere; this isn’t just a pastime for them, music making is a way of life now. And they want to ensure it’s an amazing one.  It’s all packed into a night’s work, from talking to me, playing their souls out, to connecting with other musicians and then zooming home straight after the doors shut. 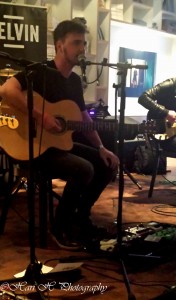 Although in the short time I got chatting to the lads, it’s nice to know they work hard and play hard, enjoying a beer or two and maybe even some Fifa. Asked about one of the things they loved when on tour in Ireland, Connor responded with:

“Guinness with a dash of blackcurrant, that’s what you call a cocktail over there!”

Well, that’s that settled then.

Kelvin may be a bit on the professional side. But I think that’s partly why they are so damn good

In fact, you might find yourself singing along with them when they belt out:

Check out Social Media and find out what Simple Minds and everyone else is saying about Kelvin. 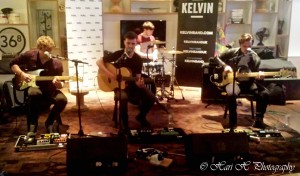