As my friend Thomas (brother of Universal Thee bassist Andrew Perrie) picks me up Glasgow after he finished his shift at the place I used to work, I’m feeling philosophical about life in general. My intention is to drink Irn Bru and do some photographs of the bands and not consume alcohol at any point in the evening. However, the road to hell is paved with good intentions, not that I’m suggesting that Edinburgh is in any way Hell. I quite like the place. Just sometimes setting yourself aims that are unachievable can only result in a fall.

The Motorway zooms underneath the car as Thomas becomes my proxy psychiatrist and we get to Edinburgh faster than you could say akataphasia. I’m rambling on a lot, he is driving so is a captive audience as we hit the outskirts of the capital. This is where the real problems begin though. Both of us kind of know where the venue is. However Matt Berry’s voice on the Satnav and the one way systems in the City cause a disconnect between where we are and where we hope to be. “fire the nuclear weapons!” and “tuuurn riight in 23 yards!” throw us a bit. “I’m a pedestrian” I shout aloud as Berry’s voice misguides us further away from the venue, of course he is not listening as it was just a recording of his lines. Thomas, a native of this fair City, eventually gets us close enough to park the car and walk to where we hope The Wee Red Bar is. This works tremendously as my innate navigation (due south of the Castle) gets us to the entrance of the Edinburgh Art College, where helpfully someone has chalked “follow the monkey” on the ground. This low tech approach takes us to the place we want to be, and would have been at earlier no doubt, if it wasn’t for that pesky Matt Berry Satnav!

We arrive just as The Indos are finishing their set, so I’ll leave a review of that band for another time. What I heard was nice though so I hope to see them at a future gig. The Wee Red Bar itself is a typical small student bar/venue which is nicely full of people who seem to like live music. Alan Clarke from East Coast Defector comes over and asks me if I’d like a drink. I automatically say “lager or something” and my soft drink dreams are shattered in three words. It is all his fault…well not really, I blame Matt Berry and his confusing directions on the Satnav.

Also at this point, I wonder about the possibly ex Spetsnaz security guard outside the place who was a bit worried about people smoking at the smoking area and requested we move aside for a trolley full of soft drinks and snacks whilst it was still out of range. We complied of course as we wanted to see the bands and not engage in combat. But for him I might have heisted a few Mars bars and some cans of Fanta as part of my world domination plans. Alas I was thwarted so I chatted with the bands for a bit instead.

And so…Universal Thee take to the stage and begin a fantastic set comprising of some songs from their first album : Back to Earth, interspersed with some new tracks from the forthcoming and as yet untitled LP. There is a dynamic at play with James and Lisa Russell’s vocals on top of Robin Spivey’s guitar riffs which are riding on top of Andrew Perrie’s bass and Matt Grieve’s drums. Like a layer cake or a pyramid. It would work just as well inverted. Universal Thee are poppy and punky and indie and rocky in equal measures. And their set is tight and organised despite their quirkiness and perhaps seemingly shambolic presentation. They come across as shy and a bit quiet in between songs, then hit you right in the face with some quite powerful lyrics and arrangements. I only do pictures for 2 or 3 songs so I can watch this band play (I also made a video on my phone can of  Xang : linked below.*) 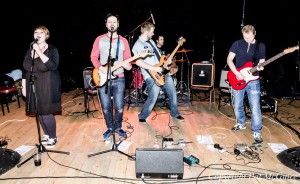 Universal Thee open with Keep Falling which is has the line “Chastity, I left my belt at home tonight” after it’s bouncy guitar/bass/drum intro.

New tracks Speaker and Hamlet 3 are high points in the set. Andrew’s bass playing suggests a baroque feeling whilst his energetic movements and genuinely joyful stances suggests a more free outlook. Robin gets tore in with his wonderfully off kilter riffs and phrases on guitar. Matt rocks out with his Cardiacs T shirt on and cowbell ( on just one song, but we are all waiting for it – Xang being the track in question.)  And Eric is done without an explanation of 0800 chat line numbers for a change (maybe I should have shouted “hey what is this song about?” ) 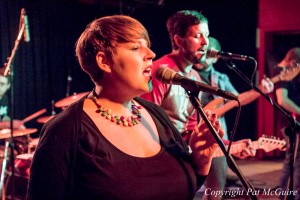 Who do they sound like to me? Pixies and Pavement spring to mind of course. But there is also an extra thing going on with Universal Thee that I can’t quite put my finger on. Do I like them? Yes, of course. They have that unquantifiable and elusive ingredient that other bands sometimes try too hard to find but which will stay elusive unless you have it inherently. They have that thing that makes you like them as people as well as a band and makes you enjoy them more and more on each listen. That “thang” or that “xang” that just can’t be faked or manufactured. It has to just happen, it has to be part of an alignment of fate/synchronicity/talent and of course, hard work.

My set of photographs of Universal Thee from the gig can be seen here.

Xang by Universal Thee on YT :

The headliners tonight are also friends of mine whom I’ve reviewed before. East Coast Defector. So tonight was pretty amazing for me as I got to see two of my favourite bands playing the same place on the same night. At this rate I might be up for a lottery win soon.

East Coast Defector are a band I’ve seen a few times in Glasgow. But tonight (to paraphrase Danny Dyer) “I’m on their manor, and things are about to kick off!” ECD (as us in the know refer to them) are an astoundingly good band. At first you would be forgiven for thinking that they shouldn’t exist, they do come across as if the universe had twisted itself a bit and came up with a random number pattern. Alan Clarke seems even taller as there is no stage in the Wee Red Bar. His frame dominates the centre as he hooks on his guitar and they go into the set. Winged by Kevin McCollum and Andrew Clarke on guitar and bass respectively. And With Albie Clark on drums holding the midfield they proceed to do what ECD do. Which put simply is to play some beguiling and lovely songs that transcend the bounds of “genre” music full stop. Some folk leaving the venue are drawn back in, at first their “WTF?” facial expressions change to smiles and thence to enlightenment.

You would be forgiven I suppose to assume that ECD are just having a laugh, they are to an extent in that they don’t take themselves too seriously, but at the same time they are a proper band who deliver an eclectic set that leaves you feeling happy and fulfilled. And also perhaps wondering about space travel, videostores, alt rock/indie music and The Hoff. 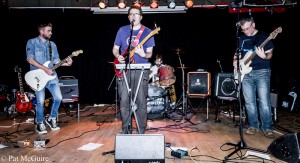 Due to the curfew being 10pm and me being a bit wobbly, I didn’t manage to get a video of ECD from the gig, but trust me, they were amazing. Alan switches between guitar and mini keyboard depending on the song and the entire ensemble works with noisy indie pop rock music. There are periods of constructed feedback and heavy drummage (one song in particular displays Albie Clark’s love of Grohlesque drums as an outro.) And then a particularly lovely cover of Daniel Johnston’s “True love will find you in the end” reveals, perhaps where ECD are coming from. 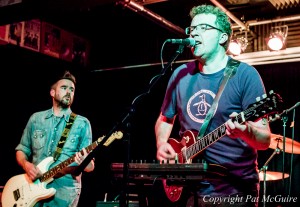 My personal favourite of the night was Blu Glo which is perhaps a song about facebook addiction. But at the same time I’m always a sucker for Mixtape which they delivered with panache and style. I will always have a soft spot for ECD for many reasons. Alan buying me lager when I was foolishly considering a soft drink, is just one of them.

My photographs of East Coast Defector are here.