After his gig, I managed to catch up with Alan Clarke of East Coast Defector who had just come off from a superb performance as the night’s main act at 13th Note Glasgow. 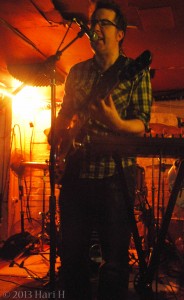 Hi Alan, thanks for chatting with me for Voice of Scotland!

Tell us a bit about the band, where you are from and how you formed?

Well I’m from a place called Inverkeithing in Fife and I moved to Glasgow many years ago and that’s where the name East Coast Defector comes from because I’m defected from the East Coast!

The guys in the band, the bass player Andy is my cousin. I went to school with Kevin so I’ve known him for a very long time and Albie the drummer works with Kevin.  Basically I had a bunch of Demo’s that I’ve had for a long time and just decided one day that we need to do something with it. The germ of the idea for our current band was when myself & Kevin chatted at an Eastwood gig about a Davie Scott and Norman Blake show at the very same venue….Carnegie Hall , Dunfermline, from there we started having practices and putting songs together.

This is where we are now.

Fantastic, I have to say, I really like your ‘Video Store’ song, it’s about a mum and dad meeting up?

It’s like one of these things you never see anymore, the video store and I just thought it was quite cute, the mum works in the record store we don’t have record stores anymore either. It’s a bit of a daft idea really! 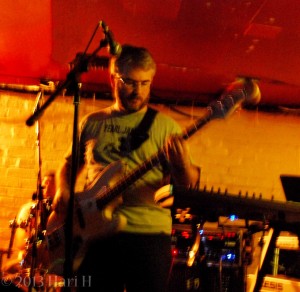 ‘Love in the Wrong Direction’ is a beautiful song, what was the inspiration behind that?

It’s funny that song, I was on holiday actually, with my family. We were over on holiday in America, there is a radio channel there called ‘Sirius XM’, one of the programmes was early 80’s electro pop, one of the other songs is The Hoff. I did a gig on my own at the Bean Scene, did a little thing with the Hoff on my little synthesizer and one of the girls that are here tonight, Claire, said oh you should do more of that electro stuff.

I was in holiday in America and I was listening to Depeche Mode and you know all the early 80’s stuff, it really sort of chimed with me. I thought I need to write a song like that, it kind of came from there. The lyrics Love in the Wrong Direction is maybe about somebody that I know who kind of was single and has very high standards and basically nobody is good enough for him.  It’s him at the top of a mountain, no compromising for him; it’s a bloke but could be anybody. It’s basically about somebody who has high standards and they can never find the right person. They are always looking in the wrong direction. It’s really cheesy but you know!

Talk to us about your last gig

This is actually our first gig as a band however Kevin, Andrew and I did a gig in Dunfermline about two months ago with the drum machine and us just playing the guitars. Albie has been rehearsing with us for just a couple of months, before that is was very informal. I’ve done solo gigs, I did one here a couple of months ago. The gig at the Bean Scene I roped in a lot of friends, Shouren (Alan’s friend) had to sing a song at the gig. When my voice went yesterday I basically had to phone Shouren and Rachel and said listen guys you have to help me sing these songs because I can’t sing them by myself! It’s all good fun. 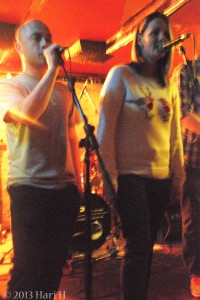 You certainly looked like you were having good fun!

Oh yea Shouren and I work together, I’ve known him for a number of years.

Has anything unusual ever happened at your gigs or during recording?

We always have a technical hitch! The gig at Dunfermline, the keyboard stopped working, the amp stopped working.  It’s quite funny, we’ve been rehearsing a lot for this and it all seemed to be going very well and then my voice went. It was a nightmare.

‘Oh sorry to hear that Alan’

How long have you been singing and what are your long term goals for the band?

I’ve been in bands since I was in high school, when I went to Uni I played in a Jimi Hendrix cover band, I’ve played bass guitar in another band as well.

Been playing gigs in Glasgow as well but I have got a young family so gigs and that take a bit of a back seat but we have started to do it again,  so this is really our first proper band gig. I think the hope is to try and record something properly, a nice little record,  maybe look at trying to get a few more gigs, maybe play a gig in Edinburgh you know. I’d like to play at some festivals too.

We’re doing this for kicks and it’s just a bit of fun. We’re not gonna go on the X Factor, we’re not gonna change the world! We’ll play a gig once in a while for some of our friends and that’s pretty good!

Do you have any tips/advice for bands or musicians starting up?

If you’ve got an idea, just go for it, a lot of people are quite worried about will they be able to do this. It’s a bit weird, I had a minor midlife crisis recently and I realised you’ve only got one life. That is part of the reason why I said I really enjoyed doing music but I never really got off my backside and done it you know.

I finally thought you know something, I better get my arse into gear, then basically went on and organized the band and gigs so far. If you think you’ve got a bit of musical talent get on and do it. Write about what you like and what you know, don’t follow a trend or what is going on in the charts, write about what you find fun. Hopefully other people will enjoy that too.

That’s how Alan does it!

Thanks very much for that Alan!

East Coast Defector have a gig happening at The Wee Red Bar in Edinburgh, on the 15th of February. Doors  are open from 7pm.  Get along for a great night.

I look forward to seeing what happens next for East Coast Defector as well!

For more information including event updates and tunes please visit: