I’m sitting in the Variety Bar with my friend Tom Perrie (Brother of Andrew Perrie, bassist with Universal Thee) waiting for another friend “Half-day McVey” to arrive. We are ruminating if the goldfish are real. There is a faux fireplace on a screen in the corner so it’s entirely plausible that the fish in the tank above the stairs are also just clever fakes, perhaps a few LCD screens in a box configuration? They could even be in a real tank but just fake robotic fish? Anything is possible these days. Maybe if I took one out and put it in my pint we would find out the truth? Luckily the band come in just as I’m about to test my theory. I’ll find out next time but for now the goldfish are safe.

Universal Thee have just finished sound check for the gig tonight and require some liquid refreshment. So we huddle up under the fake fireplace and get some drinks in. As a band they have the right dynamic even sans instruments. James Russell (singer/guitarist) is a slight chap with an air of inquisitiveness, always looking around as if he is soaking in information all the time. His wife and fellow singer Lisa Russell is charming and chatty and very down to earth. Robin Spivey (guitarist) is quiet and seems shy (but when he has his guitar strapped on it’s a different story, more about this later). Andrew Perrie (Bassist) is affable and intelligent and only has an iPhone for “work reasons“. He also plays bass with his eyes closed a lot (this becomes apparent as I work through the photographs I took on the night). Drummer Kevin Haddow is tall and slightly scary looking-as all good drummers should be. It has been said that the best bands are like a gang, if so then Universal Thee are a gang that could beat you in a pub quiz, and perhaps also in a fight in the car park afterwards if you cheated.

Back in March I reviewed their Album-Back to Earth and missed seeing them live. So I’m really looking forward to getting some shots and seeing them tonight. As an added bonus I get to spend some time with them and their Manager James Scott pre gig too. As we leave The Variety Bar the band are wondering if they can take some food into the venue. I suggest getting a “pizza pass” to go with their band passes, I’m not sure if it worked.

We cross the road and sit outside The Beresford. Sipping drinks in the sunshine that pours down Sauchiehall street and chat about comedy TV shows. Synthesizer Patel and Wilco being a key topic at one point. Their Manager James and I have a few surprising things in common too, involving criminal gangs in Wishaw, and schools in Viewpark and him having a hairy time in Bellshill once. It’s a small world. I hasten to add none of us were in criminal gangs in Wishaw…

This is not the bands first gig in Glasgow, they have played here a few times before. But it’s my first time seeing them live so I’m champing at the bit for the venue to open so I can experience some Universal Thee up close, and personal. I’ve never been in the Beresford Lounge in its present incarnation before. But it would have been nicer for the acts on the bill if there was a sign outside advising that a show was on, and perhaps one directing people downstairs to the gig too. This is no fault of the promoter(Laura Scott of the Scottish Tour Collective). The fact that a few bands have gigs/album launches on at nearby venues doesn’t help either, but that is just bad luck. (Holy Ghosts were doing an album launch in Nice N Sleazies. Eastcoastdefector were playing at Broadcast too.)

Before Universal Thee come on however we have a nice acoustic set from Madeline Orr, followed by Scott Cowie doing comedy and guitar. Both enjoyable sets that were only really hampered by there being a small crowd. And a key thing here too, the bar downstairs was closed, causing people to drift upstairs if they wanted a drink. 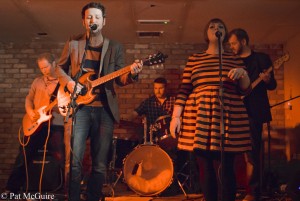 All of that aside though I was there for Universal Thee live. So I stocked up on booze and nicotine prior to their set thus enabling me to take my pictures and enjoy the show. And what a show it was. On the LP the band might sound slightly reserved, live however they rip it up, rock out and get tore in. Their songs have a certain oomph factor. Structured noise and melody whilst still being faithful to the recorded versions on the LP. 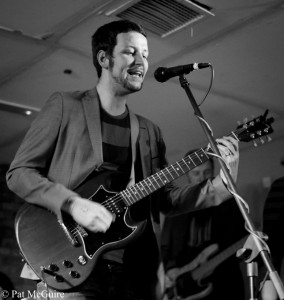 They open with Bear in the Hospital which was my favourite track on the album when I reviewed it back in March. To quote myself from that article – “A wonderful yet minimalistic song that covers all the bases for good indie rock.” Played live it is heavier and of course louder. That is why we go and see bands in the first place is it not? To hear a song organically and happening in front of us. Out front the sound is good and the band could and should be playing to a packed house. As it is though some of their friends from fellow Edinburgh band Ded Rabbit who were playing the Attic at The Garage next door are there. Wesley and Fraser from Kilmarnock’s own One Last Secret too. Along with a few punters who hung around from earlier. And of course Tom, “Half-day McVey” and myself. 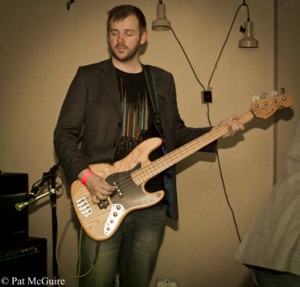 The band crack open the bottle of fuzzy pop that is Bone Collector next. This is one of their songs that openly shows their Pixies influence. I’m almost back in my early 20’s when I saw The Pixies in London, if I closed my eyes I could be there. Robin Spivey’s guitar licks and the song’s dynamic really make me think is Joey Santiago here tonight? Tiger Tiger has an short but effective intro before the song springs to life. Wonderful stuff. James and Lisa’s vocals intertwine and move around the song like a spider walking up your spine. Bendy guitars take us to the end, but I still want it to go on, and on and on. Universal Thee then do two songs that I hadn’t heard before and which are not on the LP. Why do you have to be so unkind and Xang. Causing me to malfunction in operating my camera so I retire to a table to have a sip or two of the drinks that Tom and “Half-day McVey” have bought me. Crisis resolved I go back to shooting pictures. Andrew Perrie is still playing his bass with his eyes closed. Kevin Haddow is hammering the drums(despite having to use a spare hi hat stand as a cymbal stand) and Make a little Money begins with more bendy guitar and segues into lovely vocals and quirky walking bass lines. 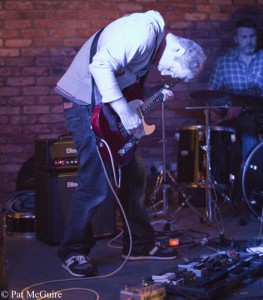 As the set draws to the last third. The band take it to Down which while the song’s lyrical content might be about something unpleasant, strangely lifts my spirits with it’s lovely noisy passages and heavy drums. Robin Spivey is not a shy guitarist, he is evoking guitar gods as he pulls something ethereal from his Telecaster. I’m hearing echoes of Sonic Youth as my ears get blasted from the side monitors and the amps. Wolves of the Netherworld then rips us all a new one! I’m genuinely scared at one point as the lyrics seem to be about what their manager James and I were talking about before the gig (criminal gangs…) but I’m sure it is not.

Always end on a high note and leave them asking for more. So the last song does this indeed. Aranis Natas is rocking us out on a high. I don’t know if the sound guy set his faders to malky, or if it’s just my ears, but it sounds loud even in the quiet parts. Menacing and almost industrial. Indie rock has never sounded so good, really! 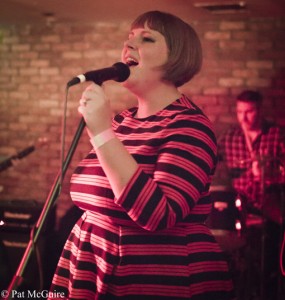 I’m sad that the gig had to end, but it left me wanting more. I’m glad I finally got to see them live, meet them in person and do some pictures and review. It vindicates me, makes me feel whole. It might have changed my life too. And to quote “Half-day McVey” (not his real name, he is a musician and producer in his own right, and hopefully I will be doing a feature on his projects soon.)-“Reminds me of Uresei Yatsura crossed with Pavement. In a good way!”

After the gig I wandered over to Sleazies with “Half-day McVey” and the band went back to Edinburgh. It was a cracking night all in all. When Universal Thee come back to Glasgow I’ll be there to see them and I urge you to give them a listen too. They are one band who are definitely going places. I foresee bigger venues and maybe even some festivals on the horizon. Catch them while you can, up close and personal.

27th of June in the Green Room in Perth.

5th July at River in Glasgow.

26th July The Corrina in Perth.