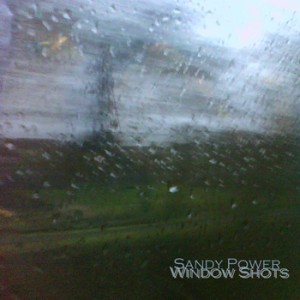 Sandy Powers; the cello player, the poet, the singer (amongst other talents), is an artist for sure. His musical creations on his debut E.P.  ‘Window Shots’ are something of a mind opener. Once I was sitting and listening to his songs I found myself wondering about the beauty of voice and guitar over everything else. It was as if I had been wrapped in the best musical blanket around. It sounds like music that has been carefully constructed to give ears the cosiest treat they’ve had in a long time.

Sandy from Kirkcaldy, Fife has dropped five tracks that are a reflection of the singer’s most creative efforts. I was hearing acoustic beats and I was hearing melody, rhythm and something else. I was hearing sounds akin to shadows, some echoing highs and lows and clapping tones that added another unexpected element to his songs. There was dimension after dimension to this mystical tale, and I was happily being guided by one of the best musicians I’ve heard this year.

The story is tenderly played out, there is an element of wonder as the final track ‘Untied’ closes, as  if to say the story has only just begun which indeed is a relief. The mystical element of the E.P. is the central thread which pulls all the tracks together.  This E.P. is easy to listen to yet I can imagine other listeners with a yearning for more. It certainly leaves you guessing and asking inquisitively:  ‘What was that?!’, and the words ‘Unbelievable and Wow’, spring to  mind.

‘Window Shots’ has really come through for Sandy, he should be proud of this one. I believe that in producing this E.P. the singer is breaking through some glass perhaps that of the proverbial glass ceiling.

Take a shot or a listen to ‘Window Shots’ the E.P. by Sandy Powers which is released by Bloo Coo Records and is out now!

And on Soundcloud too;