The basement of 13th Note proved the perfect setting for an intimate gathering of appreciative and supportive music fans; with its low lights and retro garage style set up. The room slowly filled to maximum capacity as the first act – Wolf Ruby, prepped the stage. Wolf Ruby which normally consists of four girls was down to two. Claire Campbell was on the keyboard and Siobhan Glendinning on guitar and lead vocals. The other two members of the band are Sam Good (guitar/bass) and Laura-Ann Smith, also known as Sanjo (drums).  The two ladies were to carry off songs that were normally performed by the four piece outfit, I was intrigued. 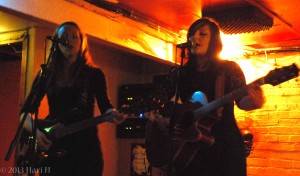 I managed to catch up with the girls briefly before they took to the stage to get some background into the band and its foundations.

‘There are not many all-girl rock bands’ – Claire Campbell professed (and this is also on their Facebook page here  https://www.facebook.com/WolfRubyGlasgow?fref=ts ).

After meeting each other at the Academy of Music and Sound based in Glasgow, the girls realised they shared the same passion for all girl bands.  Wolf Ruby was therefore formed in 2011. The Academy is also where they met Louise Rutowski, the evening’s main act. Claire confirmed the band’s musical influences include; Kate Bush, Radiohead, Muse and Maroon 5. 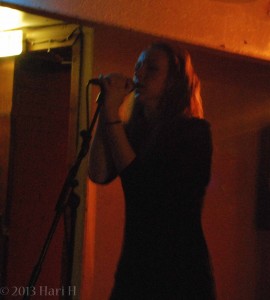 An excited Siobhan affirmed defiantly before going on stage, that they are ‘doing it for the girls’ her fist in the air.  Leaving me thinking of the ladies as a passionate, energetic and feisty bunch that everyone especially women could really appreciate, myself included; I couldn’t wait to hear their set! I was also happy to see a healthy proportion of the females in the crowd were positioned in front of the stage ready to cheer on the ladies.

With their first track ‘Chase me to the end of the earth’ – The Wolf Ruby girls packed a punch, the girls voices melted into the air with a sweet harmony and rhythm, the notes echoing into each other, it was a superb opener. The girls then went on to perform a Cranberries cover of ‘Zombie’, Siobhan’s strong vocal range was displayed in her ripping tones as she raised the bar on her range with edginess sneaking through as well. The next two songs were Kate Bush covers in honour of Louise Rutowski who is a big fan.  Their performance of ‘Hounds of Love’ and ‘Running up That Hill’ were enchanting to my ears, smooth, very elegantly sung and again harmonised brilliantly from guitar to keyboard. Their renditions received fantastic appraise from Louise as well. 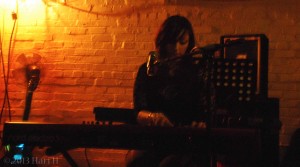 ‘Disarm’ a Smashing Pumpkins cover was a surprising offering of the whole set which was dramatically projected as Siobhan and Claire belted out the track to timed perfection. The crowd really warmed to the girls as they finished with their final track of the night, ‘Gotta get away from you’, which is a Wolf Ruby original, it really showed their creative skills as songwriters, musicians and performers.

Asked to describe their music in her own words ‘haunting harmonies’ is one of the phrases Claire used.  I’d like to say that I agree the music is edgy, dramatic, enchanting, smooth sounding yet dramatically projected. Could this be the band that inspires other girls and ladies to form their own Scottish/UK all girl rock band? They might just be… 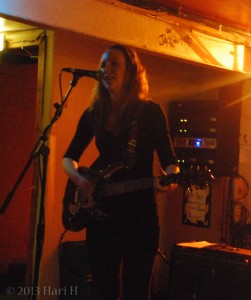 I believe the girls are incredibly talented and they appear to have fantastic potential. With just half the band playing at 13th Note, out of the four professional singers that make up Wolf Ruby I was highly impressed. However to catch all four of them together is going to be a real treat, I am eager to see what that looks and sounds like live! Here’s to the next one!

For future updates, news and information on the band please visit and like their page: