Lewis Kaye and band is a four piece Edinburgh based ensemble, made up of: Lewis Kaye (Guitar and Vocals), Duncan Robertson (Bass) Jordan Harvey (Drums) and David Scobie (Guitar and Backing Vocals).

Their sound is encapsulated in fresh pop beats, zingy guitar solos, funky bass lines, and sprightly vocals. Young Arthur Promotions have snapped up the band and are currently helping the lads get as much exposure as possible. Like their debut single, Lewis and co are definitely men (rather than man) around town. I had the pleasure of catching up with lead singer Lewis when he performed two acoustic sets at The Three Sisters Food Festival in Edinburgh. 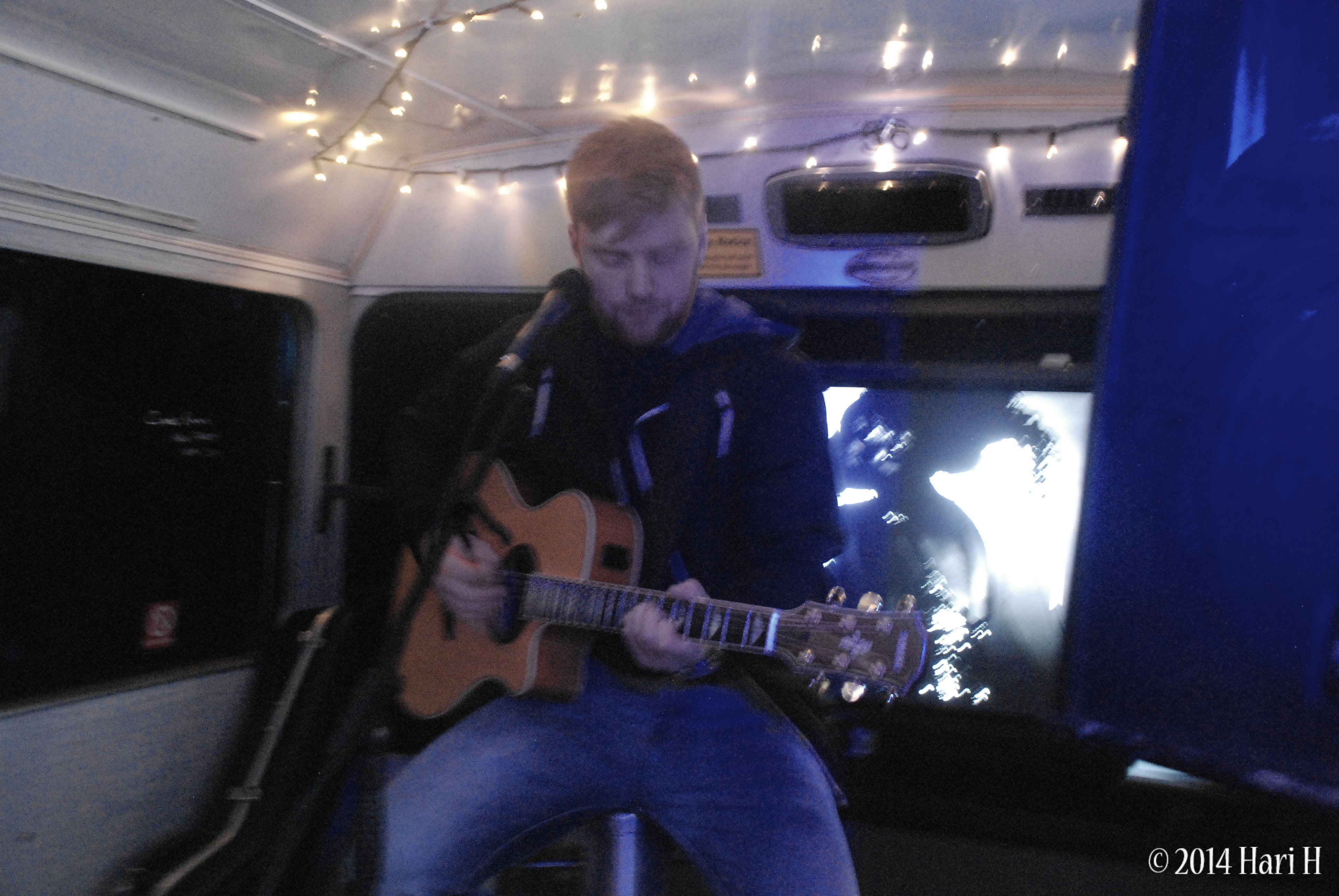 Lewis: I’ve  been gigging since I was 13/14 in bands and everything like that, just trying to get my name out there and yea moved up here a couple of years ago, just to have a fresh start. I’m from North Lincolnshire, but I’m based in Edinburgh now.

How did you find playing at The Old Town Street Food Festival?

L: It was good, the bus was interesting actually. Can’t say I have played on the bus before. It’s good; I enjoyed it and then had a cheeky wee slot on the main stage as well.

Yea, you got asked to perform again on the main stage, well played!

You have a single out as well I believe?

L: We brought it out last Saturday, and launched it at The Voodoo Rooms.

Fantastic, how was that?

L: Yea it was great; we got a really good response from that as well

What about the single specifically, what responses have your had so far?

L: We are sending it out to Radio companies, seeing who is interested in it, which places are downloading it, and seeing what happens with it.

You also performed on the Castle Sessions show at Castle FM.

L: Yes I did a show for Castle FM.  The guitarist, David and I were there. Yea it was good.

Yep always good banter and music on that show, amazing. Are you planning to gig around Edinburgh now?

L: Over the summer we’re just going to be gigging around Glasgow/Edinburgh, and go down to Newcastle. We’ll go to places like that, and hopefully make our way down to London. Just promote it and then get back into the studio and start on our second single.

Oh great! When is that going to be produced?

Do you have a lot of songs in the back burner, seeing as you’ve been doing this since you were 13?

L: At the minute, it’s just songs with the band, cos I play acoustic in a band too.  We’ve got about nine songs that we play a set with. It was just meant to be an acoustic set on the bus today. The full band isn’t here. The drummer is actually away gigging. And the guitarist is doing his own thing as well. I just soloed it.

Do you all just do your own thing?

L: Yea I met up with a bunch of musicians who wanted to help me do a few sessions here and there. We work really well together; it was actually the bass player who produced the single.  It’s going really well.

You got some good responses on the bus today!

L: Yea people were clapping away!

Are you planning on making a video?

L: Yea it’s something that was meant to happen at the launch night but we were let down. Not sure what’s happening with that right now. If we’re doing one for the first single, we’ll do one for the second as well. We’ll release that before the second single is released.

Okay so you need a Video Producer, I will get the word out for you for ….

L: That would be great.

What do you think of the current live music scene?

L: There’s always a lot going on, Glasgow is quite hectic for music.  It’s got a good music scene, but, it’s just one of those things I guess, you’ve just gotta play in the right place at the right time.

Are you looking to collaborate with other musicians?

L: Actually a friend of mine has just flown back from San Diego today.  He just did a single launch and got me a couple of contacts over there.  So fingers crossed next year, something may happen with that.

L:  I’ve got a few friends in London that are gonna be sorting a few shows out over the summer as well.

Your name will be out there in the UK and worldwide, brilliant.  There’s so much to ask after that! First, other than being a musician, is there a deep rooted purpose/message behind what you’re doing?  Do you have a specific goal?

L: I’ve been doing it for so long, growing up in a little town. Loads of people have been doing gigs; they’ve dispersed and done their own thing. I was the only one who was not doing my own thing. That’s why I thought I should broaden my horizons. I definitely wanna be gigging/touring all over. I also want to keep working in the studio, keep chipping away and see what I can get from it.

When did you actually move here?

Are you still at Uni? Studying music?

Who are your musical influences?

L: The main guy for me, who basically started me writing my own stuff  is James Morrison,  and the likes of Jason Mraz and all of that.

If you could pick anyone to have on stage and perform with you, who would you choose?

L: I’d say James Morrision, I’ve been to see him a couple of times and he is outstanding!

L: I would definitely like to jam with him

Great! Do you perform any James Morrison covers?  Is that something you plan to do more in the future?

L: I’ve done one or two, here and there, but no nothing serious. I like to perform my own stuff really. But, depending on what kind of gig it is, I will chuck a cover in now and again, just to get the crowd going a little bit. Let them listen to something they know. Hopefully, they’ll start listening to my stuff more often.

So you’re planning to tour America as well?

L: My main focus this year is to promote myself in the UK. Just get myself out there, and yea that’s really the main focus. Going over to the states is more of a treat for me.

Yea that would be amazing! 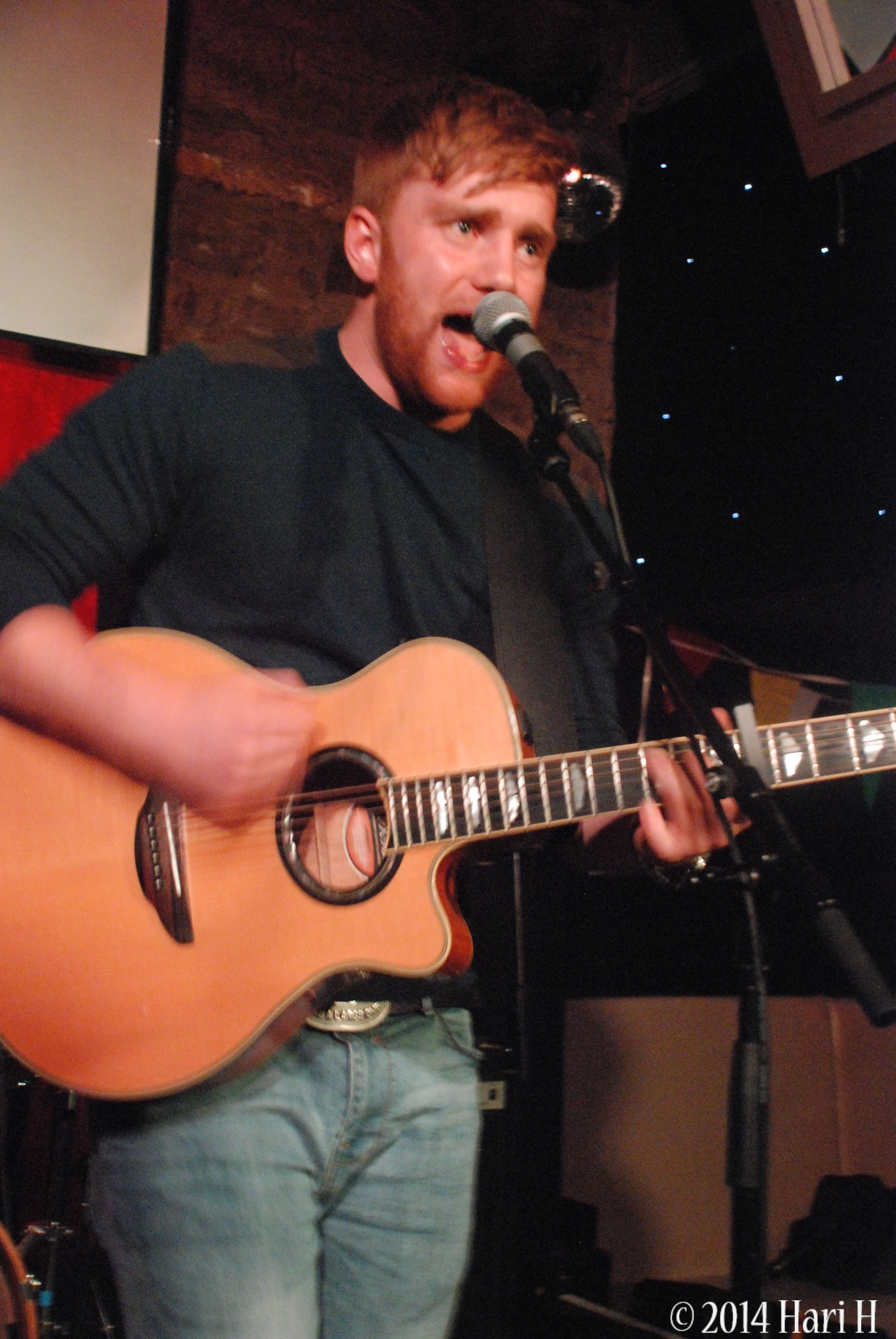 If you could have a song of yours played anywhere in the world, where would you choose?

L:  Could I choose a Radio station?

L: I’d have to say Radio 1 because the single Man Around Town would fit perfectly on the playlist right now, If I do say so myself.

L: Yea, it’s just like, people are always listening to Radio 1, and I listen to a band on there and go, yea I’ll look them up.   Catfish and the Bottlemen are getting a lot of radio play at the minute. A lot of my mates were like, oh yea I heard these guys on the radio today.  I’ve got their album now! So yea, being played on Radio 1 would be ideal.

They were playing the BBC Introducing Stage at Radio 1s Big Weekend in Glasgow, they are doing well.

Are you friends with them?

L: Our drummer is friends with the singer

L: Yea it’s always a good connection to have.

Is there anyone else you would like to give a shout out to?

L: I’d like to give a mention to a band that came and supported us at our single launch.  They are called Lizo.  They are based in North Lincolnshire which is also were they are from.  So yea big shout out to those boys, great band. Go check em out!

Any final words or lyrics you would like to share to capture the essence of you and the band?

L: Not really off the top of my head.

There’s me and the others, we have a bassist who’s very very funky. We have a drummer who’s a great drummer and the guitarist who’s great on the backing vocals. There are so many elements chucked into one band. When you listen to the single, you’ll hear it all, you’ll hear the bass riffs, drums and vocals; yea it all blends very well.

I say we’re a bit like The 1975 that’s another great band on the scene.

That’s brilliant, thank you very much.

In the most time efficient interview I’ve ever conducted, I was very impressed.  It’s nice to see a young man so focussed. It seems like Lewis and the rest of the band have carefully mapped out their music journey. If the result is anything close to: Man Around Town, then we have another quality band on our hands.  I look forward to seeing where the rest of the year takes them. With Young Arthur also making a name for themselves, perhaps an American tour is not that far away after all. I’m adding Lewis Kaye and band to my watch list.

*At the time of publishing this piece, Lewis Kaye had finished recording their second single. Can’t wait to hear it!