I believe Jonny Jack is one of the most understated yet truly talented musicians I have had the pleasure of meeting. 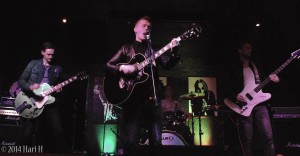 I watched Jonny Jack live for the first time at Pivo Pivo for the Glasgow Dirty Weekender. It was a superb set.  The vocals instantly hook you in as the guitar, drums, and bass work your interest. I felt something else too, a strength in the music that transcended through the lyrics and sound. Something in their songs/performance sounded piercingly honest.

Because, you’ll find they get under your skin,  which is tricky to do after seeing a band perform live for the first time.  I returned from that first gig, and loaded up their online music files for another helping. I also had to check if what I what I had heard earlier was true!

It was, and I was lucky enough to get an interview with the band. This was when Jonny Jack kindly agreed to perform for us at the Voice of Scotland Showcase gig in Dunfermline.  The guys talk sheep, freckles, wresting, homelessness, and how the really feel about gigging for zero pay. 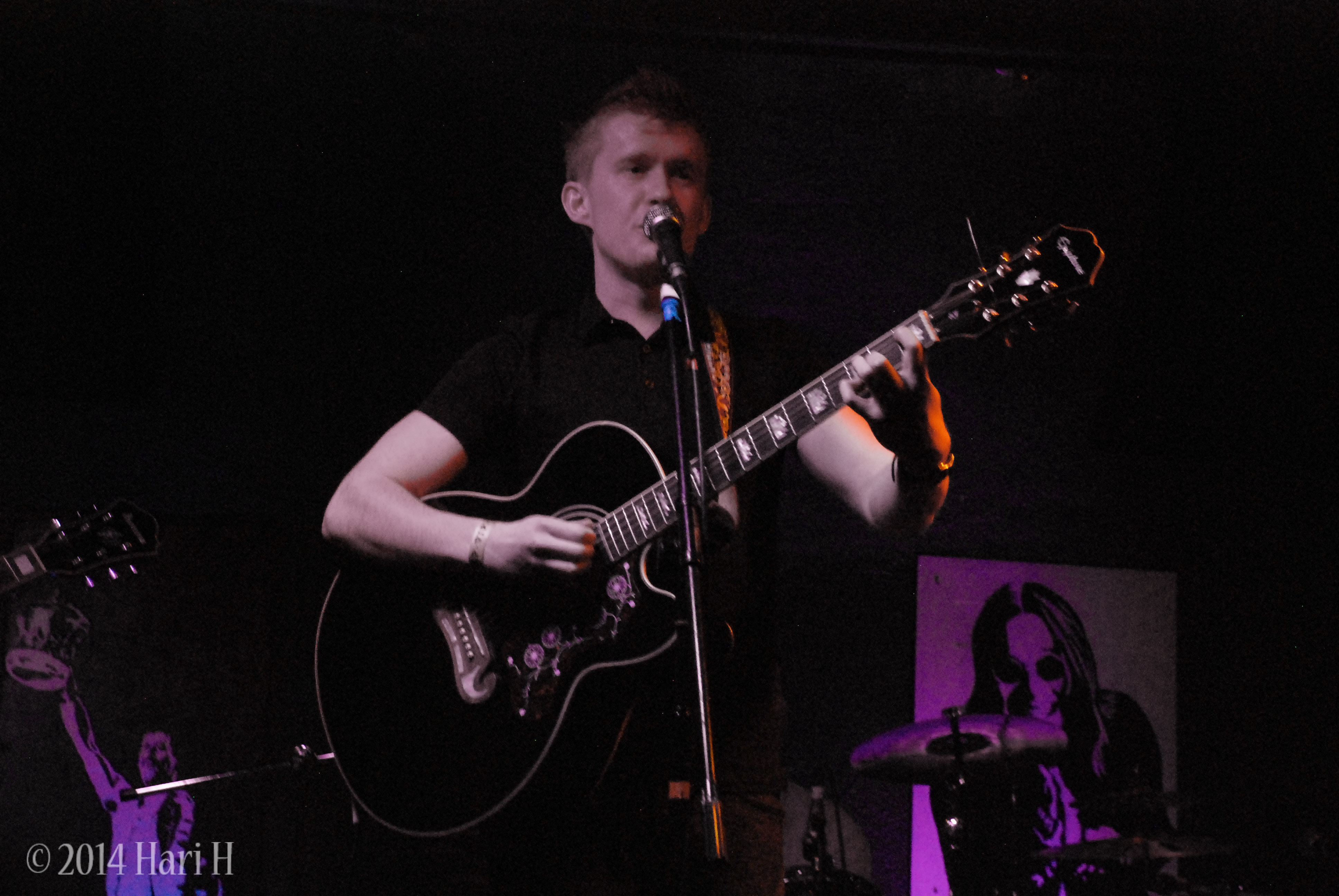 NME once described you as: “One of the most instantly recognisable and unforgettable soulful voices in a long time”. How do you feel about that?

Jonny: That was mental man, absolutely mental, that was a couple of years ago, and that’s when we had all the remixes  done on it.

“Wide Open” has loads of remixes doesn’t it?

Jonny: Yes. Some quite dodgy ones!

It feels good though, nice things being said about you, some people can say terrible things about you.  It’s no the ultimate end result. NME said it though and, it’s on all the posters

Paul: If they said it, it must be true!

It must be gospel.

You were saying you are excited about tonight:

Jonny: Yep, we are  in a good place,  good venue, and it’s the  first time playing in Dunfermline as well

Paul: Everything about it has been good tonight, the drive through, the weather

Paul: He will be out in the sun again tomorrow

Jonny:  I don’t get a tan because I’ve got freckles, I used to be told, one day your freckles are gonna join up and then you’re gonna have the best tan ever! I still believe it.

Great stuff but you can’t compete with my tan! Will interview you again when you turn orange though! 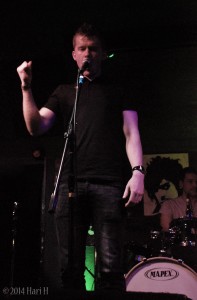 When I last saw you live, you guys were amazing.  You sang your own songs, and you also did a cover, a Michael Jackson number. I loved your version of “Rock With You”. Is Michael Jackson an influence? Tell me more:

Jonny: Michael Jackson isn’t really an influence. We were asked to do a cover for some project in America.  They wanted young unsigned acts, who were asked to re-record a bunch of classic albums.  Michael Jackson, “Off The Wall” was one of the albums we were gonna do.  We got a phone call to listen to the album and had to decide what song to cover.

Stella Reilly walks into the room and we have a chat about her performance. The singer also learns that Jonny, Paul and Michael are brothers.  Douglas then goes on to describe himself as: “The Orphaned Child”. Which leads to my next question…

Douglas how did you get together with the brothers, were you always friends of the family?

Douglas: No, we met because I was recording in the same studio, whilst these guys were launching their old album for Jerricho Beats. They asked the engineer if they knew any guys who could play percussion.  My name was mentioned, and we just took it from there. 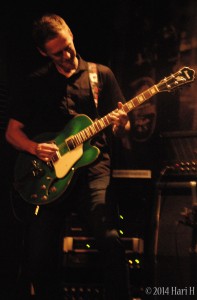 It must be great for you guys though to be playing with your brothers, as you are into the same music.

Michael: Yea well I was always into U2, Oasis and that

Paul: Other guys like Paolo Nutini as well.  We all came together full circle with our influences you know

Sounds like you guys really have pulled it together.

How was your E.P. launch for “Skin To The Bone”?

Paul: It was good.

Jonny: That was mental man!

Oh no! Where did you go?

Paul: There are question marks over him!

Have you ever used your band name to get anything?

Jonny: No I would never because it puts people off.

So you’ve had good reviews from the E.P. launch then?

Jonny:  Good reviews, good reactions from the crowd.  Good gigs! Glasgow and Edinburgh were great.  Inverness was great, we stayed over, met a lot of people from the gig and we partied with them afterwards.

Paul: So, we hung out with the locals. 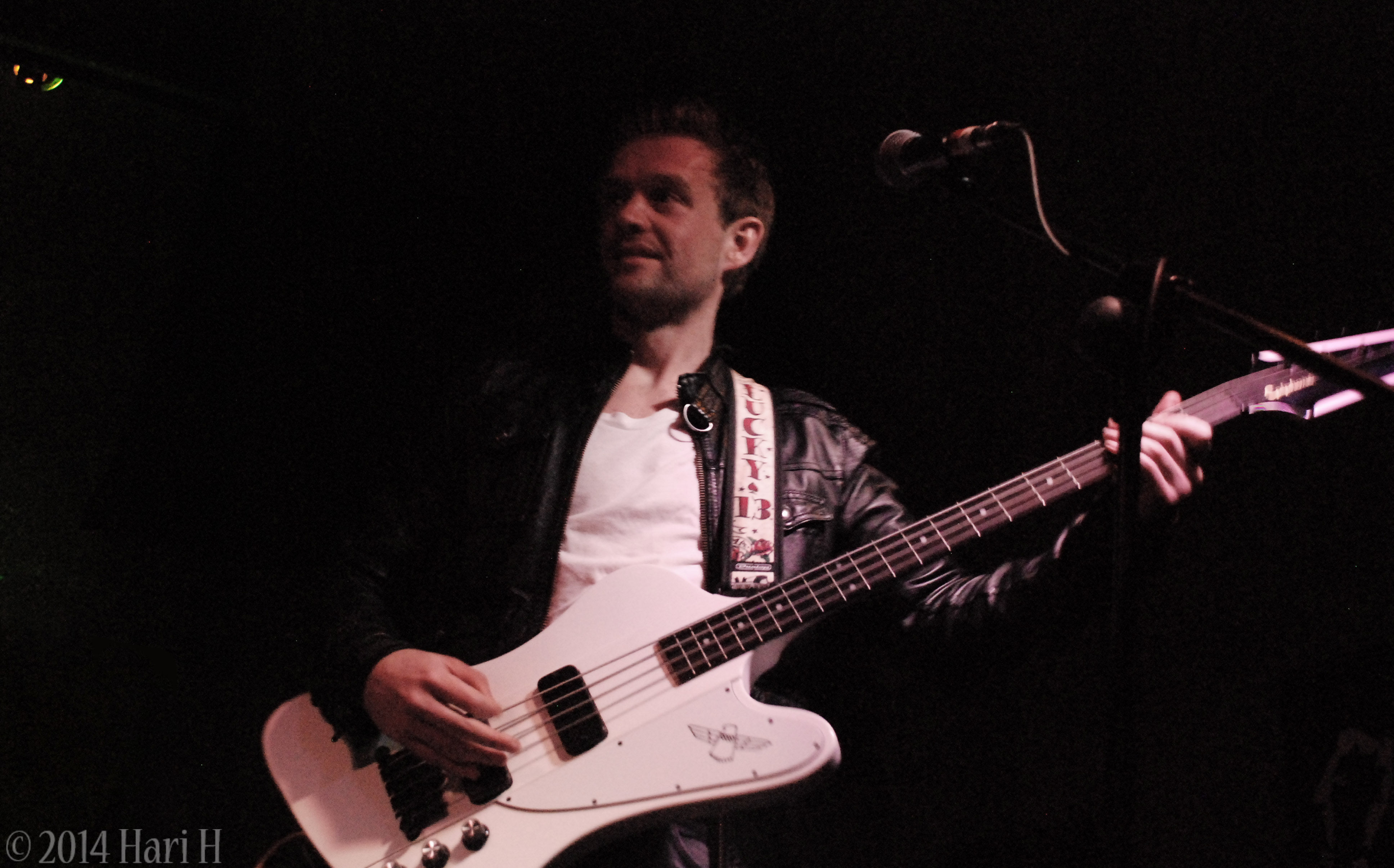 You’ve got a bigger fan base over there now?

Paul: Yea, especially with the sheep

Jonny will do anything for sheep

Michael: I suppose they are warm and comfy

Paul: In the gutter! 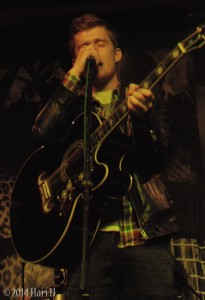 Let’s talk about your song Rennie then, the proceeds of that went to Shelter? That’s very admirable.

Jonny: Yea because it was Christmas time, we saw a lot of homeless people in town and we just thought we’d do a song for that.

Paul: We’re gonna release the video soon too, which will be months down the line. It’s about a girl called Rennie, who has indigestion, and she needs a cure. We’re hoping to get an advert made for indigestion tablets!

Paul: They need Rennies as well!

Douglas: They get indigestion too!  People buy them sandwiches and they don’t think of the consequences.

Paul: Two birds with one stone!

Paul: You might think the song is about a girl called Rennie but it’s so much deeper than that.

Paul: Jonny was suffering from heartburn the day he wrote it!

Jonny: I still actually don’t know what the song is about. 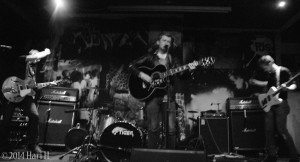 Is that one of your favourites,  actually do you have a favourite?

Douglas: There’s a great musician, I can’t remember his name,  who said his best song is always gonna be the next one.

Paul: That’s how we feel as well but we’ve got new songs every week.  We’re releasing Rennie with a video, but that song was recorded three years ago!  But, I love it, we love it, it’s one of ma favourites, it’s a wee uplifting tune! I feel like it’s a summery tune, I hear sunshine in it. I can imagine myself wearing sunglasses with the window down listening to it.

Paul: It’s hard to pin one tune down.

Michael: Jonny is a song writing machine. He writes about five songs a week.

Jonny: Doesn’t mean they are all good!  You could write five poems a day and they might all be rubbish

Paul: Jonny comes in with new songs all the time, it’s kinda hard to choose.  When I hear them I always think it’s hard to pick between them.  They all sound really good to me, I never know what one we will take forward and work on.

Michael: We usually jam out for weeks and weeks in rehearsals, until we think that one is starting to come forward a bit. I think when you jam with a song for long enough, it becomes more natural.

Paul: It comes to a point with a song then, you don’t think about it too much it just kind of happens.  Sometimes it just happens like that, with Rennie, we wanted  to play something so it sounded kinda summery.

Michael: Yea it just kind of happens like that. Basically Jonny can just be playing a solo in rehearsal and then we’ll just join in after.

You guys are good!

Paul: Thanks for saying that

Jonny: Hope you enjoy it and if other people enjoy it, that’s what it’s all about. 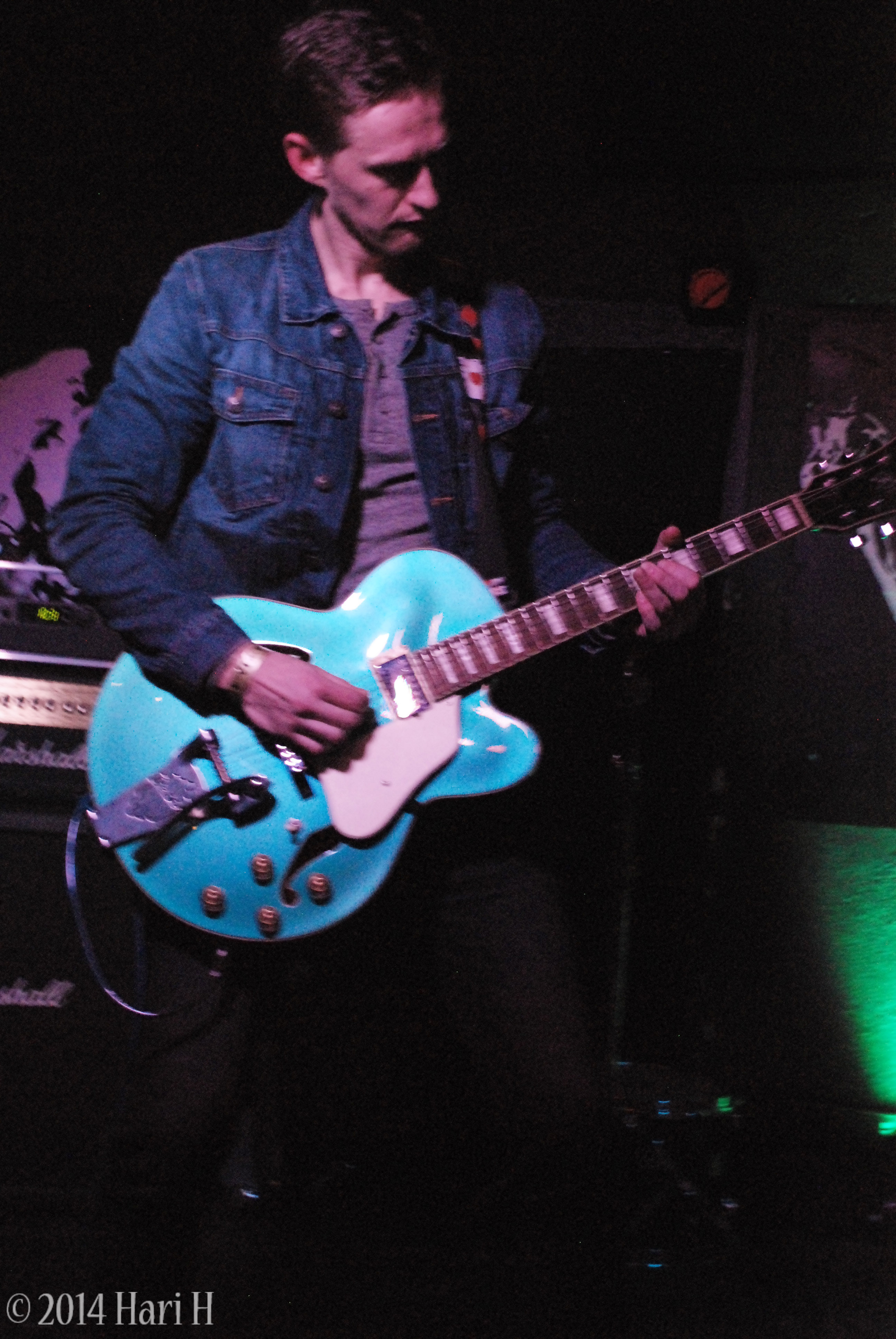 Going forward: what are your plans?

Jonny: I used to have a lot of things I wanted to achieve, this year especially because of the E.P. launch and the gigs around and about Scotland. I really enjoy just meeting people.

Paul: Is that what you call it?!

Jonny: All the things that have happened this year, and after having conversations with people in the band. We’ll just keep doing what we’re doing, and if people like it then that’s cool. It’s not the end result.

You all have day jobs then?

Jonny: If we can make a living doing this, then we’ll do it!

Douglas: I do it because I enjoy it, I’d rather play for free than not play at all. If  something comes of it, then fantastic, if not I’m gonna carry on playing regardless. 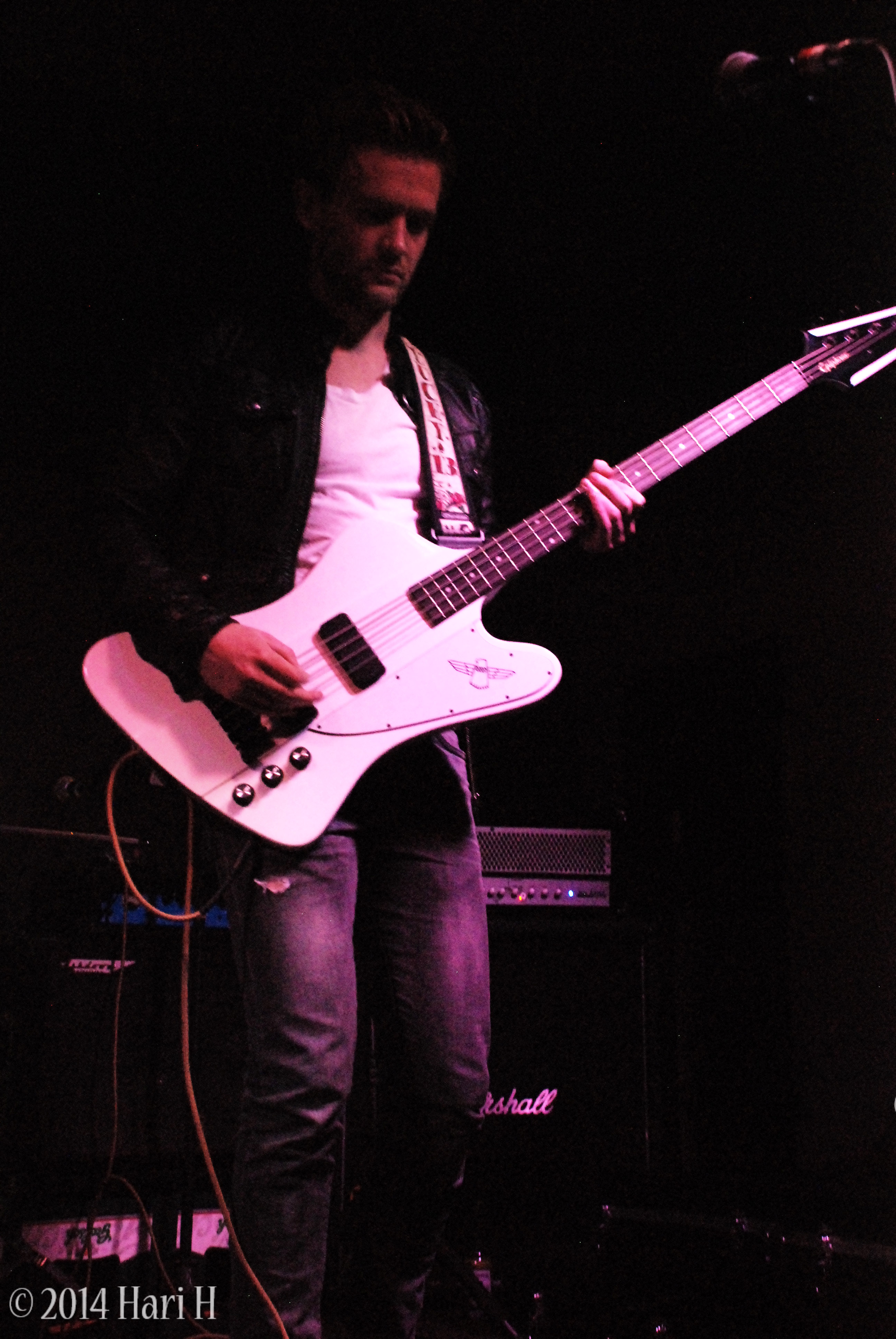 What are your thoughts on playing for free?

Douglas:  If a musician is playing for free, I think it’s down to the promoters, and the gigs and things you know. Unfortunately, it kind of undervalues the worth of the musician and the effort that’s been put in, if you don’t actually get rewarded for it.  There definitely should be rewards.

You look at function cover bands playing a wedding, and they get £200 per musician per night sort of thing, you know? Why shouldn’t original bands be given that as well?  They are putting a lot of the same effort into it as well you know. They are going travelling, singing, they are writing the songs. Yea, it is difficult but unfortunately, if you don’t play for free, you’re not going to get all the gigs.

Thank you so much for coming to this one by the way.

Paul:  Yea (to Douglas), tell us how you really feel!

How do you prepare for a gig, what’s your routine?

Jonny: I think it’s different for all of us

Michael: We also have a ceremonial arm wrestling match before every gig.  The thing is we do it with our feet!

Paul: It’s the three of us against him!

Good on you Douglas!

Oh do you? That’s brilliant…okay moving on! 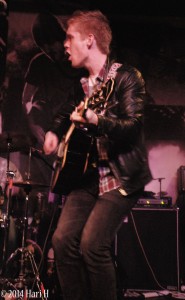 How do did you deal with nerves/ stage fright? Any advice for people who want to get into the business but are a bit anxious/nervous?

Paul: You’ve gotta love what you are doing first and foremost, you have to please yourself. If you’re getting nervous,well you need to have  a love for it inside yourself

Paul: Nerves is a good thing but. Something the earthlings have is nerves…

Paul: I get nervous before gigs, but I’m on the stage with my brothers.  I just look at them and think, I remember Jonny doing that, running around with pants on his head.  Oh and I remember Mike doing that, oh I quite like being up here now, you know.  I just imagine the audience wants me to do well.

Tell me about growing up together and that sort of thing:

Paul: That’s all you need to know!

Michael: I’m looking forward to a fight one day just to see who’s gonna come out on top

Paul: Michael was also the first to pick up the guitar

Paul: I was kind of into the drums first but, yea, I remember you got your first guitar in 2004, and that was it, Bob’s your uncle. 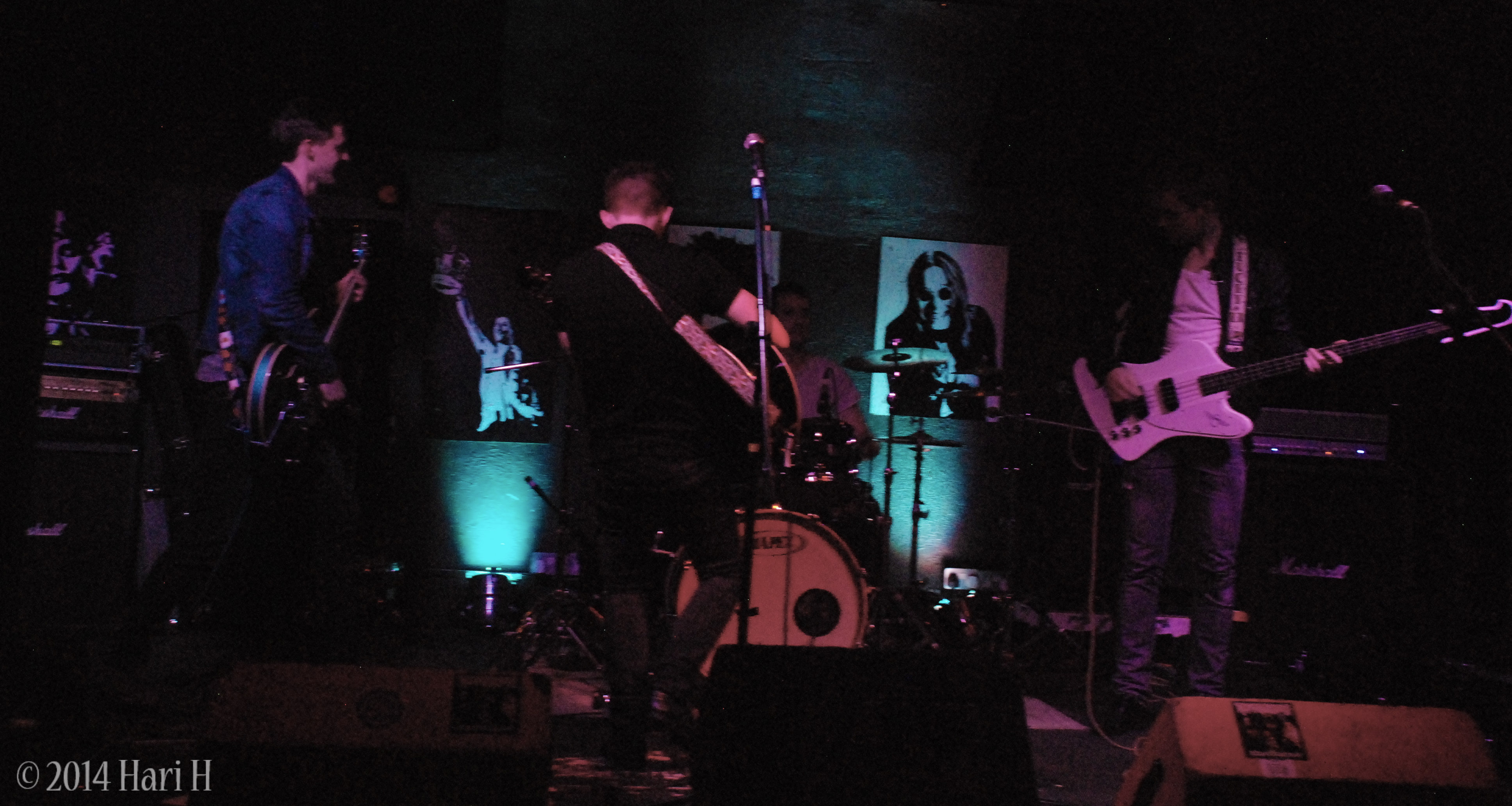 Final message for your fans:

Jonny: I’d like to thank the fans, all you fans out there for the support.

With each performance, you may find Jonny Jack’s suave sound gripping you in the midst of a set.  Listen to the emotion, the instruments, the tone, the echoes coupled with those crisp lyrics. There is a symphony of sweet, sweeping heart quenchers in each track. I’m sure they’ll be requested to play at somebody’s wedding. They are a perfect fit.

Their E.P. “Skin To The Bone” is available to stream for free on Sound Cloud.

Definitely worth checking out, What a remarkable act, one that doesn’t need to scream about their talent. they ooze it – Skin To The Bone style.

Thank you once again Jonny Jack.