The City is full of people dressed up as super heroes and sexy nurses, cheer leaders and axe murderers. I’m walking up the street toward the O2 ABC and see a guy with a cool zombie face on.  “Brill costume mate.” I quip as I pass. “It’s no a costume yah c**t! I jist goat slashed!” I hustle on swiftly and see four drunks dressed as cops rushing down to the zombie/slash victim to make enquiries no doubt and maybe call on a fake paramedic…

It’s Halloween and people are slightly more mental than usual I suppose. It’s also a Friday night in Glasgow. We are used to this, it’s part of the vibrant and pulsing heart of our city. I’m mulling these thoughts as I see a guy dressed as SpongeBob SquarePants trying to urinate in an alleyway. But he is failing dramatically and getting pee all over his costume. Our eyes lock for a second. His say “This seemed like a good idea at the time.” while mine say “I hope you find the Velcro or the zipper before you drown.”

I get to the venue and upstairs to the gig with a few minutes to spare before Gerry Cinnamon comes on. Usually I’d grab a quick pint and a smoke but I’m running late and it’s an early show. The place is filling up nicely too. Usually first supports are lucky to have twenty or thirty folk in. Tonight there is a healthy mob of people at the barriers in front of the stage at least five rows deep.

I set up my camera, say hello to a couple of other photographers and get into the photo pit. Gerry Cinnamon walks on the stage and immediately there is a roar of “here we, here we, here F*****g go!” And we do. He used to work here when he was “a wee guy”. But this is him on the stage and treading these boards to play the venue. It’s special and deserved and about time too. Gerry only recently sold out King Tut’s and also has another gig there which might have sold out already coming up on December 6th. 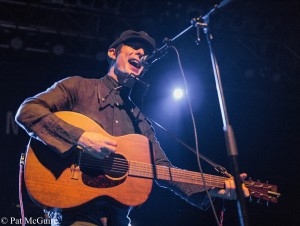 He starts off with some loopy blues magic on Gerry’s Lullaby  to get us going nicely, then does Hope over Fear which has become an anthem for positive change. People in the crowd know all the words and sing them back with passion. I know a lot of folk here tonight but there also a lot more new people who are wanting to hear Gerry. Not just for that one song but for the whole repertoire. And they do, they get a great set from a true performer who puts all his energy into playing and recording. He’s not bathing in the stage lights (in fact the lights were pretty bad for photographs, all backlit no front) or acting up. He just does his great songs the way he does. Crowd engagement is natural to Gerry. He just loves playing live and it shows.

Kampfire Vampire is introduced with a caveat about the music “business” which is good advice if you are willing to take it. You sing along to it but at the same time you can absorb the message if you are open to it. Later on Gerry is joined by Calum Frame on Fickle McSelfish  which is a lovely song delivered with grace and applauded by many.

Sadly, for me, I had to bail out early to get to the other end of town for another show. So I missed the other bands at the O2 ABC that night. But it was brilliant seeing Gerry Cinnamon getting a larger stage to play on. Also the Castlemilk folks who are part of his core following and friends (all brilliant people) being there. He also had a lot of new fans in the crowd.

Gerry’s star is rising. He puts the work in and delivers great songs and performances whilst avoiding the traps of the business. He also does regular open mic nights on Wednesdays at The Priory. See below for linkage.

Courtesy of John Mckinlay – Subscribe to his channel to see live videos, he is a true live music fan.