Our Lucid Reality champion living proactivity by changing, and challenging what doesn’t work, thus creating our lucid reality. They portray this through their alternative cosmic rock sound.  And anyone who has heard their earlier material will know this band packs a punch, not afraid to experiment through instrumentation. 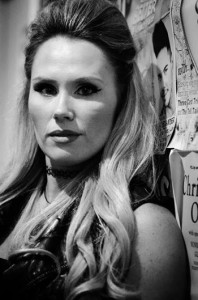 The guys from Our Lucid Reality (OLR) embodied an unforgettable energy, when I saw them on 5th January this year. Performing a gig for The Clutha Benefit Weekend (organised by WTNP), I felt lucky to have caught them that night.  Throughout the year, the band has been rehearsing,  playing shows, adding Amanda Scott to the team of established musicians, before dropping this hot record on my lap. Certain lyrics and sounds are still etched in my mind.   Which raises the question: Could it be Amanda’s vocals that seal the deal on OLR’s success?  Or, have the five-piece just developed themselves to incredible heights

‘Hy Brasil’, ventures into political agendas, journeys through time, and observes societal structures.  Each song is links into their fundamental philosophy with deep-rooted narratives.   Layered with blood pumping sounds, it’s vital listening for anyone needing an adrenaline boost.

Track 1: ‘Microcosmic Thrones’, as Chris Gray explains is about Micro level solutions. It addresses the need for individual change, encouraging this behaviour by reaching out to others to do the same. It suggests coming together in the face of political struggle, and working as a community unit in order to challenge Government policy. By ensuring maximum opportunity and co-operation, while minimising oppression. 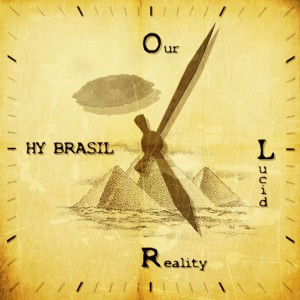 This song is led with refreshing guitar work, feisty drums which whack our ears thick and fast. Thrilling vocals from Amanda and Chris initially smooth up the tempo before bolstering the range up to pleasing heights. It’s sure catchy as hell, with an assortment of lyrics lingering for days.  Thank you for the fantastic opener OLR!

Second track, ‘Dusk To Dawn’, surprises every time with the music box effect on synthesiser. It’s slightly hypnotising, before, Rhythm and Drums interrupt and start sparring with each other. It’s as if they are having their own stand off or battle, hello incredible! They have really gritted up for this number. Interspersed with vocals from Amanda, Chris and Peter, whose, lines about being fully connected and not losing ourselves to the digital world, holds centre stage. Chris reports that this track is about maintaining our moral compass and helping each other become better people, by focussing on internal needs first and foremost.  The finger is pointed at digitalised worlds that segregate and divide from real soul connection through long-term digital entrapment.

“It’s the last of our seed, and we’re a dying breed, we’ve come and gone, but there is nothing to hold on, it’s our end, we’ve came to the wall, lets rise from dusk until dawn.”

The track finishes up with carefully selected quotes from influential figures, ending with this one as part of late President, John F Kennedy’s inaugural address

Dusk To Dawn is a track that will amaze from start to finish.

Final title track: ‘Hy Brasil’, is where Our Lucid Reality’s EP comes full circle. Spellbinding key notes glide in then guitar, bass and drums chase through the melody by pounding out a monster beat.  The vocals harmonise Hy Brasil’s tale, and what a tale it is!

‘Hy Brasil’  is  based on Ancient Alien Theory. Chris explains this is about civilisations from the BC era that left information for other generations to uncover and make sense of. Sergeant Jim Penniston’s story is where the song idea originates.

As a US Airforce Officer, who was in England in 1980, Sergeant Jim Penniston discovered an abandoned craft.  On touching the craft, approximately 12 pages worth of coded binary images (binary numbers) were imprinted in his mind like an instant download to the brain.  Although unlike computers, Sgt Penniston was not able to uninstall, or even delete this information. Eventually, the officer decided to get the codes translated, the coordinates marked out axis points that led to an Island showing in world maps as Hy Brasil, dating back to the 16th century. The inhabitants of this Island were said to be a technologically advanced population, last seen by Italian sailors before sinking under the ocean waves.

“ (An) Airforce officer touched the craft, which sent him coded information (it was a matrix like flash imprinted into his mind of binary numbers) he then jotted these down….years later he went to a binary specialist and he translated a message along with the longitude and latitude off the coast of Ireland. When experts did their research they discovered that as far back as the 1600s there was an Island shown in world maps, which was named Hy Brasil.” – Chris Gray.

One message was translated to read: ‘exploration of human activity is pivotal to the planet’s progression’.

It has a sort of Big Brother meaning to it, watch everyone, and keep studying the population of the planet. Why? One answer could be the straightforward reason that information is power, and its use is dependent on the holder of said information. Questions like this are the very ponderings that come from listening to this curiously intelligent number.

Hy Brasil will take you to the edge, making you shake to the amped up sound. Certain lyrics and solos continue to race through the mind. It’s a weighty track which may arouse the animal in you.

A few lines from Hy Brasil that might lead to tune implantation:

“Will you bring us fortune or bring destruction sacred scriptures have revealed your plans , lets crush them all. Words don’t mean a thing when you’re deceived by an enemy.” 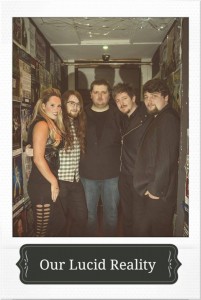 After closer examination, I think Hy Brasil by Our Lucid Reality is an outstanding achievement from a fine Glasgow band.  Amanda’s inclusion provides an essential element to the excellent body of sound carried forward by the remaining members. However I believe, It is Our Lucid Reality’s continued musical exploration that has led to this beautifully crafted 3 track EP.  I can imagine it fitting in nicely, playing along a high impact suspense thriller.  And there’s no doubt the band will sound far better live than this EP will ever suggest.  Congrats on this one OLR!